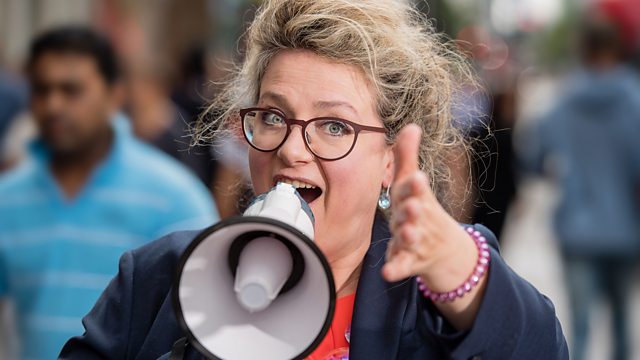 Royal Institution Christmas Lectures 2017: The Language of Life
Episode 3 of 3

Professor Sophie Scott investigates what language is and whether humans are really the only species to use it.

One skill in particular seems to give humans an advantage over all other animals - our superior talent for language. We have the power to express exactly what's on our minds through speech and writing. This final lecture asks where our incredible linguistic ability comes from and whether any other animals use language in any form at all.

Professor Sophie Scott first explores what language really is, and how close other animals come to having it. Dogs can be very good at following our commands, but do they actually understand any of the words we use? Birds are the only other species that can say human words and Professor Scott reveals how humans and birds share some common brain functions that make this possible. She also shows what happens when this section of our brain cannot function properly. But are birds simply mimicking us or can they comprehend anything of the human words they can be trained to utter?

Professor Scott considers the world of primates and the theory that some apes may communicate through sign language. Does this contain any form of grammar and how complex are the messages that they can communicate with these gestures?

With large-scale experiments, Professor Scott tests out fresh ideas of how humans have been able to develop such complex language skills - revealing how, even in the womb, we start to practise making the mouth movements needed for speech. She also illustrates how the brain develops to favour the sounds of one's mother tongue and why, at a relatively young age, it becomes impossible to become truly bilingual in a new language.

But language isn't just a power to combine words. Professor Scott explores how we convey a huge amount of information through the tone of voice, our accents and the pace and pitch of our speech. But in a world when we regularly talk to computers, she also shows why scientists need to develop machines that can understand the subtleties of our speech to be able to fully comprehend human language.

Finally, Professor Scott looks at language in the digital age and explores the role that emojis play. Can they put the subtleties of spoken speech into written form by adding an extra level of understanding? With the help of the audience she investigates their true potential and reveals additional emojis that may say far more than words.

Silent Messages—2017: The Language of Life