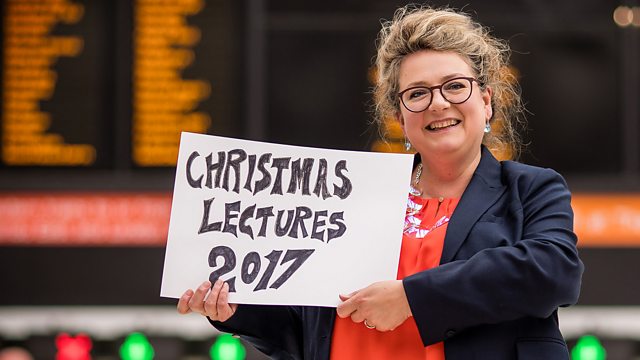 Royal Institution Christmas Lectures 2017: The Language of Life
Episode 2 of 3

Professor Sophie Scott explores the world of silent communication, investigating why smells and body language can say so much.

In this second lecture, Professor Sophie Scott explores the world of silent communication in the animal kingdom and the human world - showing how much we can actually say without ever opening our mouths or making a noise.

Professor Scott's investigation of silent messages begins with the smells that animals and even plants produce to communicate with each other or to send information. She illustrates how a plant can use pheromones to attract predators that will attack the insects eating it and how a snake's forked tongue helps it decipher smell messages in its surroundings. Professor Scott delves into just what dogs learn about each other from smell when they first meet and why their olfactory abilities are far more powerful than ours.

Professor Scott reveals how some species have harnessed bacteria to generate light and how light messages are used by insects and deep-sea fish for a range of reasons including attracting prey.

Exploring how body language communicates huge amounts about us and other species, Professor Scott shows why a dog's wagging tail does not always mean it is happy and how humans can tell a lot about someone's state of mind from their posture alone. She reveals why yawns and smiles are contagious and how this can play a key role in social bonding and cohesion.

With the help of the lecture theatre audience, Professor Scott also unpicks how we use our hugely expressive faces and eyes to communicate. She opens up the concept of microexpressions - brief, uncontrollable facial expressions that may reveal our true state of mind. Could these be a new way to tell if someone isn't really telling the truth?

In a glimpse of how we might send messages silently in the future, Sophie also explores the possibility of direct brain-to-brain communication. Could the science fiction idea of telepathy ever become reality?

Say It with Sound—2017: The Language of Life