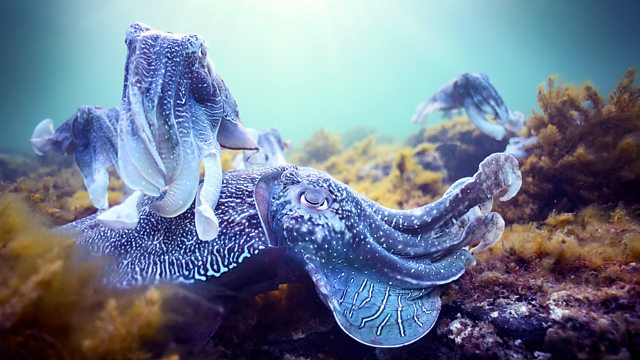 This extended special of the nature documentary series journeys from the equator to the unexplored depths, meeting the best-loved characters from the series.

In recent years, our knowledge of life beneath the waves has been transformed. Using cutting-edge technology in this extended special we celebrate the highlights from the series. From the intense heat of the tropics to our planet's frozen poles, through to its unexplored depths, we reveal new worlds and extraordinary never-seen-before animal behaviours.

Starting in the tropical coral reefs - the most diverse ocean habitat - a tusk fish demonstrates a surprising level of ingenuity - tool use - as it uses corals as an anvil to break open clams. In the Seychelles, half a million terns nest on an island. Fledglings must eventually take to the wing, but danger lurks beneath the waves: metre-long giant trevally fish leap clear out of the water to snatch birds on the wing.

In the tropics sun heats the sea, creating rain, winds and huge storms that drive up towards higher latitudes. Here the seas change with the seasons. In spring thousands of mobula rays gather in Mexico's Sea of Cortez. At night, in a previously unseen event, tiny organisms that light up when disturbed react to their wingbeats, creating an enchanting bioluminescent firework display.

The seasonal seas are home to bountiful kelp forests. In the undersea forests of southern Africa, one resident - the common octopus- has become the ultimate escape artist. To outwit her nemesis, the pyjama shark, she uses ingenious tactics, never filmed before.

On the coast, two worlds collide. Where sea meets land, coasts are the most dynamic and challenging habitats in the ocean. The ever-changing tides create rock pools. But these temporary worlds are a battleground. Predatory starfish turn a magical garden into the stuff of nightmares.

The big blue is the world's greatest wilderness - it's a vast marine desert where there is little to eat and nowhere to hide. Sometimes there is a brief explosion of food in this marine desert, but ocean hunters must be fast to make the best of this bonanza. We witness super-pods of up to five thousand spinner dolphins racing to herd vast shoals of lanternfish, briefly caught at the surface where it is thought they spawn. New aerial footage reveals, for the first time, the spectacular feeding frenzy of 90kg tuna and dolphins smashing through the lantern fish shoals turning the sea white with foam.

The deep is perhaps the most hostile environment on Earth, at least to us - a world of crushing pressure, brutal cold and utter darkness. We have barely begun to explore it and yet it is the largest living space on our blue planet, home to strange worlds like methane volcanoes and undersea lakes of salty brine. But life adapts in ingenious ways, like the sea toad - a fish that walks instead of swims. And barrel-eye - a deep sea fish with a translucent skull so that it can see through the top of its head to make the most of any glimmer of light.

The deep is more closely connected to our own world than we ever thought possible due to giant ocean currents. We join these ocean currents as they begin their lives in Antarctica and flow from the poles to the tropics and back again, linking every ocean. Ocean currents move heat around our planet and maintain a climate favourable for life. But our ocean system, in relative equilibrium for millennia, is changing at a worrying rate.

Deep in the polar north, we meet walrus mothers and their newborn calves, searching for an ice floe to rest on; but with rising temperatures, summer sea ice is retreating- their battles to survive are becoming ever harder. As we begin to understand the true complexity of the lives of our ocean creatures so do we recognise the fragility of their home.