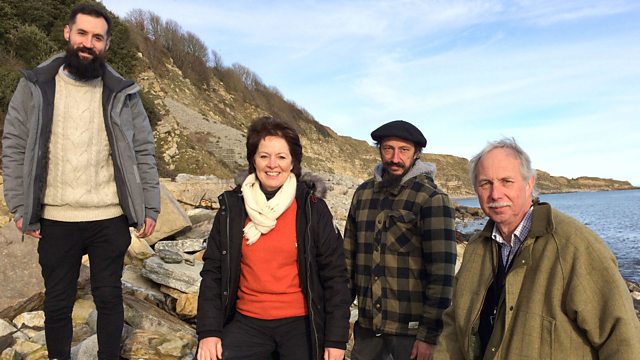 Finding Fossils on the Jurassic Coast

After the recent revolutionary discovery of the fossilised teeth of a mammal who lived 140 million years ago, Helen Mark meets the fossil finders of the Jurassic Coast in Dorset.

The crumbling Jurassic Coast in Dorset has already helped us to discover some of the most interesting species from deep time, revolutionising our understanding of dinosaurs and the prehistoric landscape. The latest important fossil to be found along this stretch of coastline is not a huge dinosaur but a tiny mammal. Grant Smith recently found the fossilised teeth of a small rodent like creature which date back to the early Cretaceous period, around 140 million years ago. The sophistication of these teeth have made scientists reassess the time frame for mammal development as they indicate a far more developed mammal species who would have lived alongside the dinosaurs of the Cretaceous period.

The new species which Grant unearthed is mankind's earliest ancestor and has been named 'Durlstotherim Newmani', after keen amateur palaeontologist and local landlord Charlie Newman. The landlord of the Square and Compass in Worth Matravers founded his own fossil museum in the pub, and pointed Grant to the location in Durlston Bay at which he found the specimen.

The rich history of scientists and academics being ably assisted by passionate amateurs on this coastline is echoed further down the coast at Kimmeridge where Steve Etches, a retired plumber, has just opened his incredible collection of fossils to the public at the Etches Collection. It is a history of collaboration which goes right back to one of the earliest fossil hunters Mary Anning and as Helen Mark discovers the work of the people who live along this coastline in enhancing our understanding of deep time is now being rightly celebrated.

Football and fairies around Bradford

Wild Cats in the Highlands