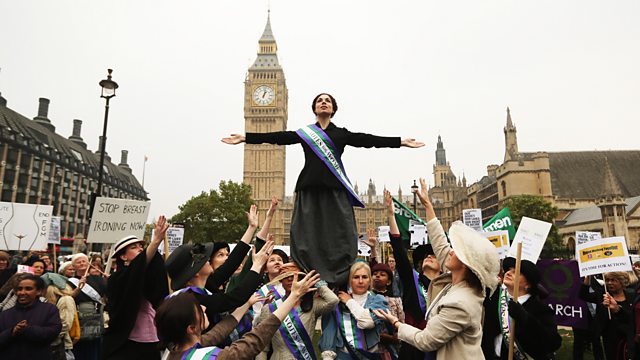 British women first got the vote a century ago this year. The social historian Jane Robinson tells Andrew Marr the suffrage movement is known for the actions of its militant wing and their call for 'deeds not words'. But thousands of ordinary women, known as suffragists, campaigned successfully to have their voices heard too. Political theorist Christopher Finlay asks whether violent political protest is ever justified, while the artist Peter Kennard explains how he was inspired by the protest movements in Europe in 1968 to infuse his works with politics. The writer Mary Shelley was born into a politically radical family, with an anarchist father and her mother the feminist Mary Wollstonecraft. On the 200th anniversary of her novel Frankenstein, the poet Fiona Sampson looks back at Shelley's radical life.

Peter Carey on legacies of the past

Jane Robinson is an author and lecturer.

Hearts and Minds: Suffragettes, Suffragists and How Women Won the Vote is published by Doubleday.

Fiona Sampson is a prize-winning poet and writer.

In Search of Mary Shelley: The Girl Who Wrote Frankenstein is published by Profile Books.

Christopher Finlay is Professor in Political Theory at Durham University.