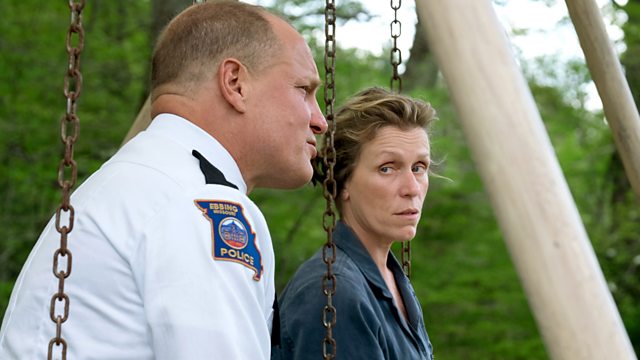 Rita, Sue and Bob Too; 3 Billboards Outside Ebbing Missouri; Lily Tuck; History In The Making; Britannia

Rita Sue and Bob Too at The Royal Court, 3 Billboards Outside Ebbing Missouri, Lily Tuck's novel - Sisters, History in the Making at Alan Cristea Gallery, Britannia on TV.

The controversy surrounding London's Royal Court Theatre's staging of Andrea Dunbar's semi-autobiographical play Rita Sue and Bob Too led to it being postponed and then rapidly reinstated. Written in 1982 when she was 19, can it now be seen as a period piece?
3 Billboards Outside Ebbing Missouri is a darkly comic film starring Frances McDormand, written produced and directed by Martin McDonagh
Lily Tuck is a winner of The National Book Award in the USA. Her latest novel Sisters imagines a woman trying to deal with her relationship with her husband's first wife.
History In The Making at Alan Cristea Gallery in London is an exhibition of works which make reference to, or appropriate, historical art as part of their working practice, Britannia is a new TV series set in 43AD, "following the Roman army as they return to crush the Celtic heart of Britannia". It's on Sky Atlantic
Tom Sutcliffe's guests are Miranda Carter, Maria Delgado and Lawrence Norfolk. The producer is Oliver Jones.

Rita, Sue and Bob Too

Image: The Other Richard

Three Billboards Outside Ebbing, Missouri is in cinemas now, certificate 15.

History In The Making

History In The Making is at the Alan Cristea Galletry in London until 10th February.

Sisters by Lily Tuck is published by textpublishing.