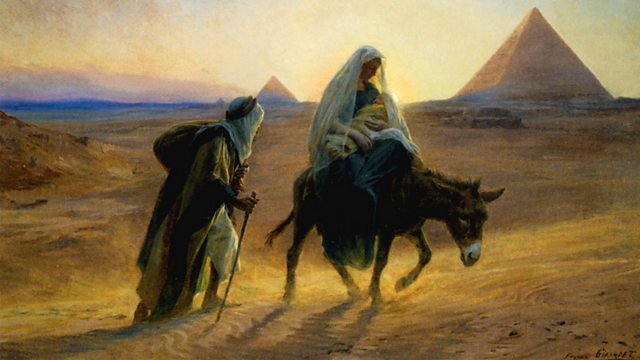 A reflection in words and music to bring Christmas Night to a close from Sarah Teather, director of the Jesuit Refugee Service UK.

A spiritual reflection in words and music to bring Christmas Night to a close from Sarah Teather, Director of the Jesuit Refugee Service UK. This personal meditation finds the joy of Christmas breaking through in the messy painful struggles of life, including family tragedy and the lives of refugees. Featuring beautiful choral settings by Francis Poulenc, James Macmillan and David Bednall, the programme weaves music and text to explore profound themes of human life and the Christmas story.

Sarah Teather is a former Westminster MP and Government Minister but has been working for the Jesuit Refugee Service since June 2015.

Christmas Day night seems such a quiet time – most of the country are probably safely tucked up in bed by now stuffed with turkey, telly and a couple of antacids.  For my family though, this night tends to be the lull before the storm: on Boxing Day, like a gathering in of scattered tribes, all generations descend for The Main Event.  Early in the morning my dad will rise in his dressing gown and wrap a multitude of sausages in bacon, preparing for the onslaught of grandchildren who journey East by Satnav, so to pay homage to the gift mountain piled beneath the tree.

Approaching the Christmas season has felt a bit strange for us this year.  We had to remember to dial down the meat order because the one with the largest appetite will be missing from the table: we lost my younger brother, Matthew, just before his 40th birthday in May.

They found the tumour a few days after his first daughter, Thea, was born.  Cancer took his body a bit at a time in just under 9 months, paralysing him as it spread up his spine.  He suffered, and it hurt to watch. And yet all the while Thea grew and blossomed, whether in spite of or because of the tragedy unfolding around her I cannot tell.  Certainly, she was adored in the hospice, by patients and nurses alike; she thrived too on the love of extended family, ever present during those months, to free my sister-in-law to keep her faithful vigil at her husband’s side.

As Christmas drew closer, I found myself reflecting anew on one especially memorable afternoon at the hospice in the days before Matt died.  The hospice team flung open the doors from his room that day and we wheeled him out in his bed on to the patio. The cool spring air was thronging with life: birds were singing and the breeze had the tang of freshly dug earth from newly planted flower beds.  Matt was already drifting in and out of awareness, but he was alert enough to see Thea laugh with delight as she took her first steps unaided, run—stumbling between my arms and those of her grandpa.
Here was life, new life and vitality in all its rich overflowing abundance, in the midst of one deeply loved whose life was ebbing away.  I remember wondering then how it was possible to ache with that much pain and yet still to taste joy and even hope.

Hannah Arendt said that the miracle which saves the world from its normal natural ruin is natality: the birth of new men and women and new beginnings.  This is “the faith in and hope for the world”, she said, “that found its glorious and succinct expression in the gospel’s announcement of glad tidings: ‘For unto us a child is born.’”

Births, new starts and new beginnings usually involve some struggle and pain.  I have often seen that weaving of joy and pain in the lives of those we accompany at the Jesuit Refugee Service, where I now work.  The entanglement of hope and loss is integral to the life of anyone who must journey, leaving family, country and identity for a new start.  But what grows out of apparent ruin often takes me by surprise.  Perhaps, as Arendt says, it is this character of startling unexpectedness which is inherent in all beginnings.

[Music: “Today is the beginning of our salvation”; from Welcome All Wonders: A Christmas Cantata, by David Bednall. Choir of The Queens’ College, Oxford.  Director, Owen Rees. Signum Classics.

One who experienced this struggle and complexity with intensity was a young woman who asked Jesuit Refugee Service for help at Christmas last year.  I shall call her Asma, as it would be better if I did not share her real name while she’s still trying to resolve her situation.  She was pregnant with her first child and facing imminent homelessness, and as the gospel says, “sore afraid”.  Government support for destitute asylum seekers doesn’t usually kick in for women in her position until the end of pregnancy, and even then, accessing it is fraught with difficulty.  The time came for her to give birth, and still they refused her a room.  A community of religious sisters stepped in to the breach and welcomed her into their home, feeding and fussing over her as if she were their own daughter, though they were not of the same religious confession, devout Muslim that she is.  A bond of deep affection grew between them. Asma gave birth to a healthy baby boy, and there was much rejoicing in the sisters’ house. What miracle the boy’s birth seemed to be in the midst of so much struggle!

Perhaps appropriately the name of the religious order who welcomed Asma bears the name of the Holy Family; it is hard not to hear the echoes of their trials in her story.  A month after the birth, the Home Office finally housed mother and baby, but in keeping with their rules of dispersal, the housing was several hundred miles away from anyone who had previously cared for her. And so like the Holy Family at Epiphany, she began another long journey with her infant son, conscious this new beginning would bring much hardship and loneliness, but steeling herself in courage to continue on.

I have always been very drawn to Poulenc’s illustration of the nativity in O Magnum Mysterium; it captures the breath-taking awe of the sacred mystery, but doesn’t shrink from the strangeness of the story, even its unease.  For here was another young woman, forced to journey while heavily pregnant to register with authorities; her people oppressed in an occupied land.  The only place she could find to give birth was in animal quarters and it was the animals who first saw the new born Lord, lying in their feeding trough – words Poulenc is determined we should hear, and he repeats them with insistence.  Those next on the scene were not close family whose comfort Mary must have longed for that first Christmas, but poor shepherds, who hurried in from the fields, still reeking of sheep and dirt. There is no trace in the Poulenc of the usual saccharine depiction of sanitised stables; the harmonies are incongruent, hard to master; the intervals unfamiliar on the ear and timescales shift as the world turns on its axis for this most surprising and upending of new beginnings.  Yet there is also profound beauty – a beauty you can grasp only in the long arc of its melodic line.

A human life contains many experiences that defy reassuring explanations.  Often there is no tidy resolution to its contradictions and griefs.  But yet there is beauty too, woven tightly with it – sometimes in the delicacy of a tiny moment, when life springs forth from difficulty in freshness and new possibility; other times revealed only in the longer arc of a life lived, when discordant harmonies find their place, and interrupted cadences which once ached for resolution herald instead hope of a story which will go on.

God was born man: but not in to some idyll of our idol of perfection; no, He was born into the messy truth of human existence, with its joys, struggles and tragedies, sharing all its intensity and physicality.  Christmas Day brings an invitation to notice Him, born afresh into the complexities of our own lives: in the faithfulness of one who never left the bedside, in the delight of a child taking her first steps, in the generosity of hospitality and the solidarity that rejoices with another, in the courage to journey on...

[Music: “And Lo, the Angel of the Lord came upon them”; by James MacMillan. Taken from the album Who are these Angels? Capella Nova, directed by Alan Tavener. Linn Records.

And then it catches us… this hope of possibility, as it caught me that spring day at the hospice; it catches us unawares. It comes in the darkness, rising from the ruin of our brokenness, at first just a faint thread of something unfamiliar, but unwilling to be supressed, it grows into cries of incongruous joy.  A joy that startles, rising like the multitude of angels to pierce the gloom and light up the sky.

[Closing music: “And Lo, the Angel of the Lord came upon them”; by James MacMillan. Taken from the album Who are these Angels? Capella Nova, directed by Alan Tavener. Linn Records.