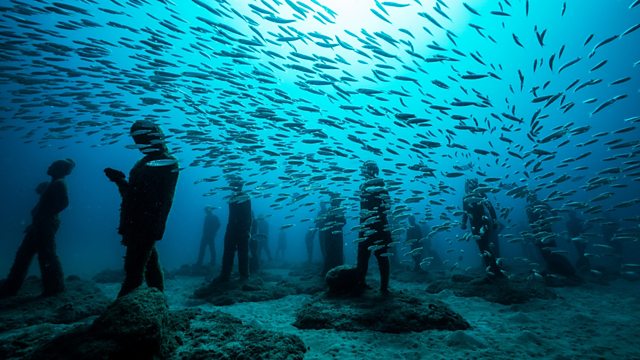 Rana Mitter with: novelist Jennifer Egan; on the liminal legal status of a Tudor salvage diver; and a discussion of why Space exploration still trumps oceanic research.

Diving from Tudor times through the Brooklyn Naval Yard in the Second World War to present day deep water sculpture parks and swimming with whales. Rana Mitter talks to prize-winning writer Jennifer Egan about the Sea as metaphor and how the research for her latest novel, Manhattan Beach, was the inspiration for its time-shifting, punky, award-laden predecessor, The Goon Squad.
He hears from historian Miranda Kaufmann about the existence of a black population of skilled workers in Tudor England, one of whom dived salvage on the wreck of the Mary Rose after she sank laden with cannons on her way to wage war against the French.
And he's joined by marine biologist, Alex Rogers, writer and whale lover Philip Hoare, and Jason de Caires Taylor, creator of the world's first underwater sculpture parks to discuss why decades after we first saw our blue and watery planet hanging in space, we still find it easier to ignore our oceans than explore them.

Manhatten Beach by Jennifer Egan is out now.
Miranda Kauffmann is the author of Black Tudors.
Philip Hoare's most recent book is called RISINGTIDEFALLINGSTAR.

The Invention of the Circus Ring