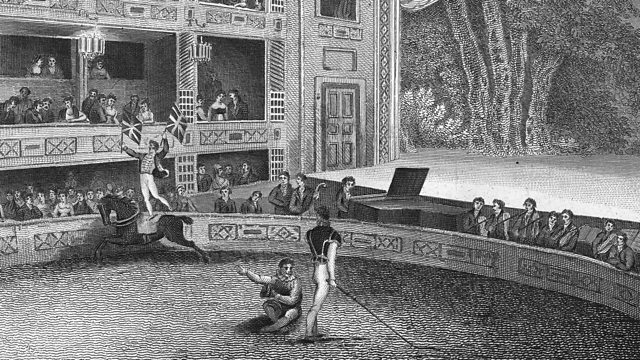 The Invention of the Circus Ring

Matthew Sweet looks at the career of impresario Philip Astley and 250 years of the circus with Vanessa Toulmin, Andrew Van Buren, Naomi Frisby and Tom Rack.

When Philip Astley and his trick riders performed in 1768 in a circle not a straight line in a field behind where Waterloo station is now, the idea of the circus ring was born. Matthew Sweet looks at the career of the impresario, his 42 foot diameter ring which is still the big top template and 250 years of circus with historian Vanessa Toulmin, performer Andrew Van Buren whose family have worked for 35 years to bring Astley's name to greater public attention, writer Naomi Frisby whose research focuses on women's bodies in relation to circuses and sideshows and Tom Rack, artistic director of NoFit State circus

Circus250 is a celebration with events around the UK and Ireland.