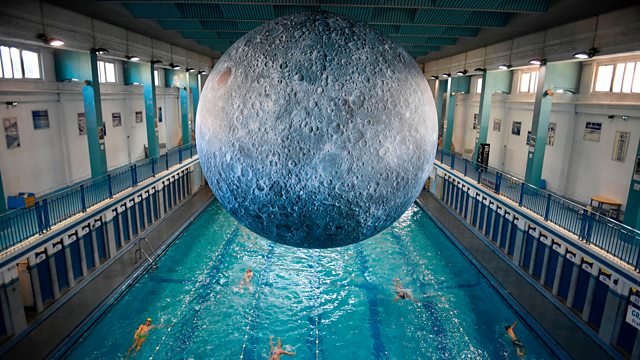 Why the Moon, Luke?

Artist Luke Jerram is obsessed with the moon. So he has made one seven metres wide using Nasa imagery, and he is taking it around the world. This is his story, and the moon's.

Luke Jerram is that rare bird, a genuinely popular yet acclaimed contemporary artist. And he's obsessed with the moon. So he's made one: seven metres wide featuring 120dpi detailed NASA imagery, and he's taking it around the world. This is his story, as well as the moon's..

Every day Luke Jerram cycles to his studio across the river in Bristol and watches its dramatic changes. It has the second highest tidal range in the world and it's the moon that makes this happen. Luke's become fascinated with finding out everything he can about the cultural, artistic and poetic significance of the moon, and the latest scientific developments around it. It both reflects our culture and inspires it.

Being colourblind he's interested in all forms of light, and moonlight is fascinating and has very particular properties. The fact we see 'the man in the moon' is a perceptual and optical illusion. But again, different cultures see different imagery - in China they see the Hare in the Moon.

Luke presents his own story of making these works and hearing people's responses to them, woven in with the new soundtrack he's commissioned from composer Dan Jones. We talk to fellow contemporary moon obsessives James Attlee and Jay Griffiths, but it's all filtered through the very particular consciousness of one artist and his imagination, and the hard slog of his creative process.