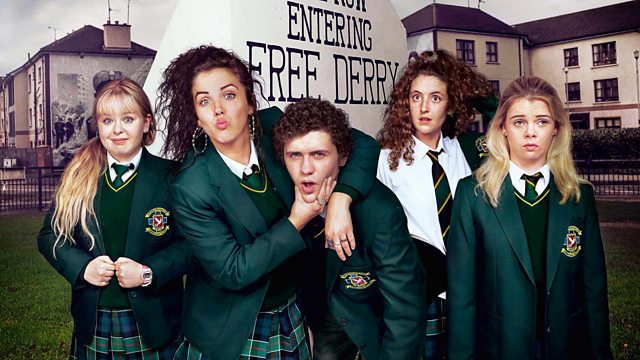 The programme that offers a female perspective on the world. Writer Lisa McGee talks to Jenni Murray about her new sitcom Derry Girls, set against the backdrop of the Troubles.

The writer Lisa McGee grew up in Derry, Northern Ireland in the 1990s. She's written a new comedy set against the backdrop of The Troubles. She joins Jenni to discuss life as a teenager then and creating humour out of conflict.

Consultant Plastic & Reconstructive Surgeon Ruth Waters is a specialist in a complex type of breast reconstruction - the DIEP flap procedure, which takes tissue from a woman's stomach to reconstruct her breast after a mastectomy. So how can tummy fat be used in this way? Jenni is joined by Ruth to discuss the operation, other options available and the pros and cons of having reconstructive surgery immediately.

Only 2% of photographers hired at major commercial agencies are women and 5% of the images used by leading publishers are from female photographers. To discuss why, Jenni speaks to Jean Wainwright, Professor of Contemporary Art and Photography at The University for the Creative Arts and Chloe Beale, an amateur photographer.

New research says 1 in 4 pregnant women have mental health problems. It suggests that it's more common than previously thought. So, how important are midwives when it comes to picking up the signs of mental health problems? What questions do they ask, how frequently, and are they the right ones? Jenni talks to Jill Demilew, a consultant midwife at Kings College Hospital, London.

An increasing number of women are working in the science of fishing and finding ways of protecting future stocks. BBC Radio Cornwall's Hannah Stacey has taken a trip to Padstow to meet Dr Carly Daniels, the research and development officer at the National Lobster Hatchery.

BBC TWO - Surgeons: At The Edge Of Life