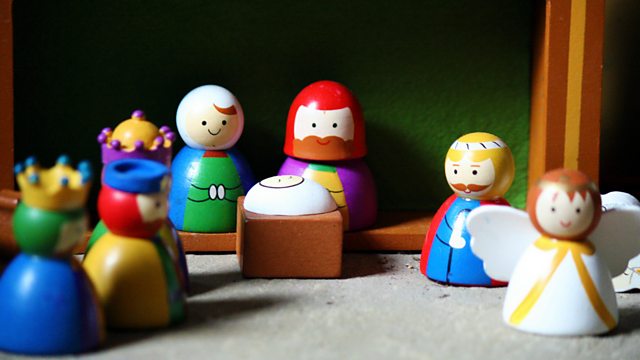 Bethlehem's Manger Square, the new bishop of London and what other faiths do on 25 December. Some of the stories in this special Christmas Eve edition.

Yolande Knell soaks up the atmosphere in Bethlehem's Manger Square as Christians worldwide prepare to celebrate the birth of Jesus.

Reporter Vishva Samani talks to women sleeping rough in Manchester and asks why their numbers are increasing.

A Muslim, a Jewish and a Hindu family each describe what they get up to on the 25th December.

Two years ago, the Butrus family fled persecution Iraq and Syria because of their Christian faith. As they prepare to celebrate their second Christmas in this country, they tell Edward Stourton about their flight and their hopes for the future.

In recent years, Islamic extremist such as ISIS and Boko Haram have attacked Christians in the Middle East and Africa but there is growing concern for Christian communities in India, Pakistan and China too. John Pontifex from Aid to the Church in Need tells Edward why persecution against Christians is on the rise.

Since 1983, the choir of King's College Cambridge has performed a new carol at the Festival of Nine Lessons and Carols. This year's is by Welsh composer Huw Watkins, Professor of Composition at the Royal Academy of Music, we get a sneak preview.

In the early years of the 20th century, 'the wizardry of Mr Marconi' enabled the BBC to celebrate a very British sort of Christmas with the rest of the world. To take a look at those first festive offerings from Auntie Beeb, Edward is joined by Paul Kerensa, author of a new book called 'Hark! The Biography of Christmas'.

Sarah Mullally has just been appointed to the one of the top jobs in the Church of England - she is going to be the next Bishop of London. She talks about the challenges ahead and how her background in nursing will impact on her new role.

The Archbishop of York, Religious news for 2018, The Daily Service is 90