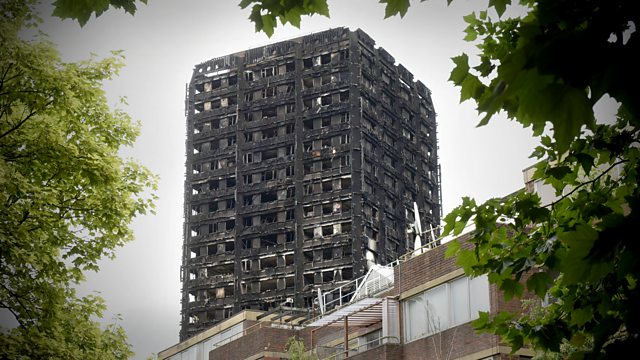 Grenfell: Dust on Our Lips

As recovery work continues in Grenfell Tower, what is the future of the building and its surroundings? Former residents and those living in its shadow give their views.

As recovery work continues in Grenfell Tower, what's the future of the building and its surroundings? Former residents and those living in its shadow give their views.

Faisal Metalsi has lived in the area all his life and Grenfell Tower has been a prominent part of it. In this programme, he asks friends and neighbours how the sight of the Tower affects them,and what they think should happen to it. He talks to those involved in the recovery operations inside the Tower, and we hear lessons from elsewhere on how best to memorialise a site of tragedy and trauma.

Some local residents describe the sight of the burned-out shell of Grenfell Tower as "a daily act of abuse". Many want the building torn down as soon as possible - while others say it should remain as an indictment of unheeded warnings and failures of management.

Six months on, work continues inside the Tower to recover and identify victims, retrieve belongings, and investigate what went wrong. It's a painstaking process involving multiple agencies. And it's highly sensitive. The NHS spoke out recently about the scale of trauma in the area, saying the number of people affected was likely to exceed 11,000. When local people hear noise and see movement in the Tower, it can be distressing, And as days get shorter, some have been startled by the sight of a light in an old friend's window.

The poem "14 June 2017" is written and read by Father Alan Everett of St Clement's Church.