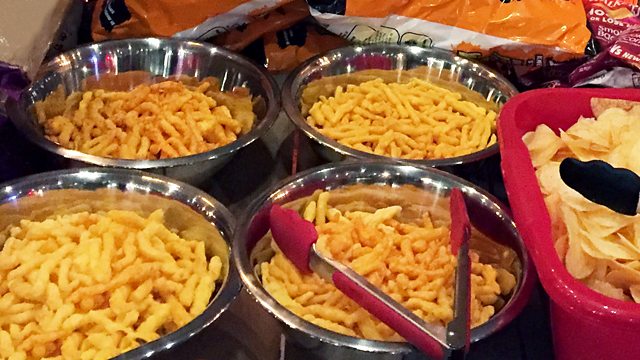 Investigating every aspect of the food we eat. Sheila Dillon explores our national passion for crisps, 200 years since they were invented.

We have a national passion for crisps. Every week, on average, each person in Britain eats 4 bags of crisps - a staggering 240 million bags a week. This is a good moment to look more closely at crisps, since this year they celebrate their bicentenary. It's 200 years since the eccentric Dr William Kitchiner published "The Cook's Oracle", a best-seller in its day, with the first recorded crisps recipe. But quite what made them such a part of British life it's hard to say. In search of answers, Sheila Dillon is allowed a rare visit to the Walkers crisps factory in Leicester to meet people whose job it is to taste crisps all day long. What new flavours are in the pipeline? She hears from schoolchildren about why they insist on crisps in their lunchbox, and from twenty-somethings spending a wild Friday night at a "bottomless crisps party" in a Birmingham bar with all the crisps you can eat. She meets Charles Spence, Professor of Psychology at Oxford, who won an "Ignobel Prize" for his "sonic experiments" with crisps, and talks to Dr Sara Lodge, historian of the crisp, who believes crisps are a symbol of proud British individualism: the individual bag of crisps is on a par with other national icons like the mini or the red telephone box. More disturbingly, Sheila discovers from investigative reporter Joanna Blythman what is actually in crisps and what this gargantuan national consumption might be doing to our health.

The World's Most Popular Cheese: The Story of Cheddar