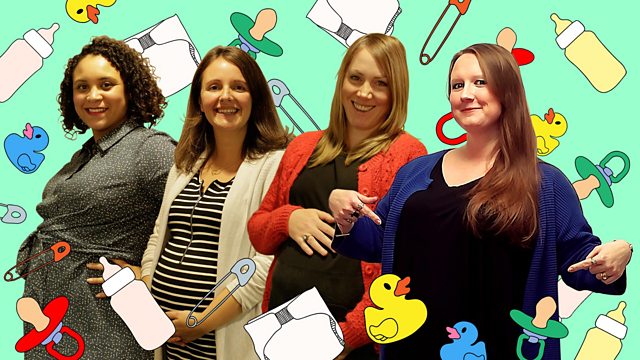 Female perspectives. The launch of Bump, Birth and Beyond. Has sexual harassment arrived at a watershed? Plus the look being created by period gang drama Peaky Blinders.

In what could be the first Woman's Hour baby group we're launching Bump, Birth and Beyond. A series following the experiences of four pregnant women who're all due to give birth around the same time. In an honest conversation about pregnancy, birth and expectations, our reporter Abby Hollick, who is herself 33 weeks pregnant, talks to Charlotte Dore, Rowan Lawton, Jen Barratt and Laura Lang.

Will the last few months prove a watershed moment for sexual harassment? Jenni will be joined by the founder of Everyday Sexism Laura Bates, activist and writer Bea Campbell, academic and broadcaster Emma Dabiri and Sarah Baxter deputy editor of the Sunday Times to deliberate how lasting any change might be.

The period gang drama Peaky Blinders draws to a close next week but the look of Cillian Murphy's lead character Thomas Shelby is far from over. From overcoats and three piece suits to peaked caps, the trend of 1920s Birmingham is fast making an impact on the high streets of 2017. We discuss the show's influence on men's fashion.

Poet and writer Nan Shepherd; The Fix: Women and Addiction; Siblings and their partners.

See all clips from Bump, Birth and Beyond, Sexual Harassment, Men's Fashion (3)