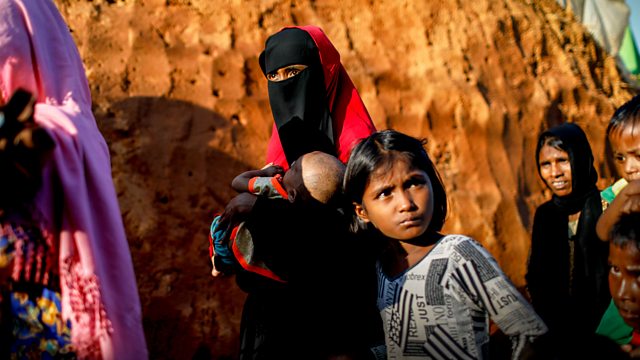 With hundreds of thousands of Rohingya Muslims fleeing Myanmar for Bangladesh, we talk to foreign correspondent Christina Lamb about conditions facing women and children in the refugee camps, amid reports of widespread rape and killings.

The Queen's Young Leaders awards recognise the work of young people across the Commonwealth to change lives in their communities. We talk to one of the two UK-based winners Leanne Armitage who won her award for the work she's done to inspire those from disadvantaged backgrounds and ethnic minorities to enter the world of medicine.

Paul Shanks suffered from mental health issues before killing himself at the age of 51, leaving his wife and seven children. Film-maker Lucy Cohen has turned their story into a Netflix documentary about how the family learn to cope. Vikie Shanks discusses the impact his death has had on their children and how they've tried to understand their father's mental state.

Real-life female role models are being celebrated in books for younger readers with some runaway success stories. So how important are these books and what makes someone a convincing role model? Space expert and author Libby Jackson and Dr Hetta Howes, a lecturer in medieval literature at the University of London, discuss.

For some women, it's clear that having children is part of their future; for others it's definitely not. But what about when you're just not sure? Comedy writer Sian Harries and dating and relationships coach Katherine Baldwin discuss ambivalence towards becoming a mother.