BBC Four
The Art That Made Mexico: Paradise, Power and Prayers
Main content 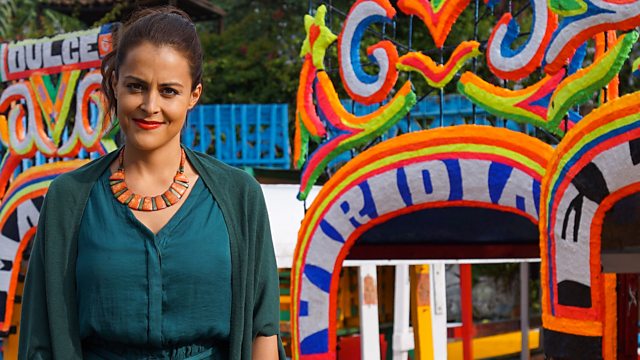 The Art That Made Mexico: Paradise, Power and Prayers Series 1
Episode 1 of 3

Alinka Echeverria reveals the way in which Mexican artists shook off European artistic influence to find a distinctive voice, expressed through landscape painting, and reconnected with pre-Hispanic subject matter. The murals of Teotihuacan and illustrated Aztec codices show how nature was the reference point for their worldview, their power structures and their calendars. But following the conquest in the 16th century, the Spanish 're-educated' indigenous artists to aspire to European aesthetics, and for nearly 300 years after conquest, the art of what was called New Spain looked a lot like the art of old Spain.

A century after independence in 1810, artists began to depict Mexico's ancient foundation myths, including the symbolic volcanoes that dominate the Valley of Mexico. Indigenous people, their land and lives were no longer taboo. Following the Mexican Revolution that began in 1910, landscape paintings established a new style that was resolutely Mexican and confirmed the re-established connections between Mexico's indigenous population and their land. Forces of nature and Mexico's landscape continue to be integral to the Mexican sense of artistic identity.

See all episodes from The Art That Made Mexico: Paradise, Power and Prayers