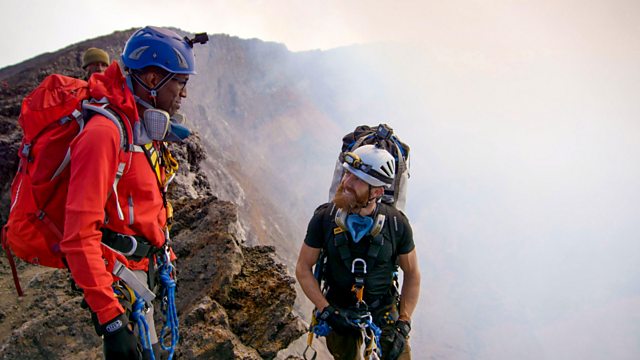 Two-part documentary. Chris Jackson, Xand van Tulleken and Aldo Kane take part in an expedition to Nyiragongo - one of the world's most dangerous and spectacular volcanoes.

In the heart of Africa, deep in the Congo, is one of the most spectacular volcanoes on Earth - Nyiragongo. This spectacular volcano contains a massive boiling cauldron of molten rock - the world's largest continually active lava lake. But it is also one of the most dangerous volcanoes on the planet. It has erupted twice in the last 50 years, most recently in 2002, wreaking havoc and destruction on the people who live in the nearby city of Goma. This region is also dangerous for another reason - it has been racked by war and humanitarian crises for most of the last 30 years, so Nyiragongo is one of the least studied active volcanoes on Earth.

But now, an international and local team of scientists are mounting a major expedition to study the volcano. They are attempting to discover the warning signs that it is building towards a new eruption, so they can alert the people of Goma before it erupts again. The team will take around four tonnes of climbing equipment, scientific instruments and supplies up to the crater rim. Then a small team will descend into the crater itself - 350m down a potentially deadly rockface - to spend a week camping right next to the lava lake. The expedition is led by Belgian scientist Dr Benoit Smets, who is an expert on Nyiragongo. He is joined by British geologist Prof Chris Jackson. Together, they work with the rest of the team using gas-sampling equipment, thermal cameras and sound waves to try and predict when the volcano will next erupt.

But there is another side to this volcano. As well as the threat of eruption, it impacts life in Goma and the surrounding area in many surprising ways. Humanitarian doctor Xand van Tulleken investigates how Nyiragongo has transformed people's lives by looking at the hidden dangers - from deadly disease to suffocating gases. In charge of expedition logistics is former Royal Marine Aldo Kane. It is his job to get everyone in and out of the crater safely. But during the expedition, he will also risk his life to get the team as near to the lava lake as possible.

See all episodes from Expedition Volcano