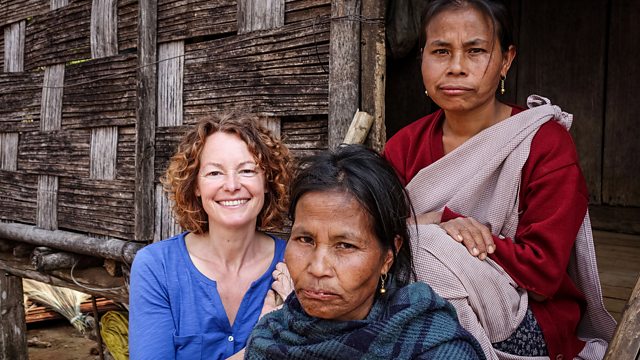 In north-east India Kate Humble searches out one of the world's last remaining matrilineal societies where Khasi women hold the wealth, family name and many of the top jobs.

In the third and final episode, Kate is in Shillong, the capital of Meghalaya state in north-east India, in search of one of the world's last remaining matrilineal societies. India has been ranked as one of the hardest places to be a woman, where inequality and arranged marriage are commonplace. But in this remote corner of the country the local Khasi people, who number around 1.75 million, practise a matrilineal way of life where everything including property and the family name is passed down the female line.

Kate travels high into the hills above Shillong to the village of Kongthong. The history of this culture has only survived orally; it's believed that when Khasi men went off to fight wars they would be gone for years and many wouldn't return, so it was the women who took over managing the family wealth and became responsible for the vital continuity of bloodlines by passing on the female family name.

Kate camps in the village to spend several days with the Khongsit clan, who've lived here for generations. She is greeted by a woman called Shitoah, who is the most important member of the family, the Khatduh. What's unusual about Khasi society is that this most important role is taken by the youngest daughter. She inherits the family property and the largest share of the wealth compared to her older siblings. Unlike the rest of India, the birth of a daughter is vital to continue the family line, so it's the youngest daughter who holds this role as the one most likely to marry last and therefore most able to take care of ageing parents.

Early the next morning the family takes Kate to harvest wild pepper deep in the valley below. On the way she hears unusual and beautiful singing echoing around the valley and learns that the Khasi use these uniquely composed songs to communicate with their family across the hills.

While pepper picking, she speaks to Shitoah's husband Bah Lung to find out how he feels about his wife holding all the purse strings. Kate admires his strength of purpose and respect, and his belief that upholding the matrilineal way of life is right at the heart of what it means to be Khasi.

Kate ventures down into the valley with the male members of the family to repair a traditional root bridge. The roots of two rubber trees have been trained over centuries to grow across the river to form a bridge, which was once a vital trade link to neighbouring villages. She learns that while they support the matrilineal way of life, they're also nervous about its future.

So Kate leaves the apparently utopian village of Kongthong to find out whether the system is under threat as the values and pressures of the modern world take hold in the region's capital.

Shillong was once a British hill station at the time of the Raj, but today it is a growing hub for education. It does feel different to the rest of India, as women can hang out with men without stigma and enjoy social mobility. They can aspire to careers and Kate meets one woman, a Khatduh, who's fulfilling what most Indians would assume is very much a man's job: a police inspector. The inspector is in charge of one of the largest of Shillong's traffic districts. She believes that it's the equality of the matrilineal system that allows women to succeed. And after suffering domestic abuse, it's this system that allowed her to divorce her husband, something that would be unthinkable in much of India.

However, Kate learns that there are cracks developing in the Khasi matrilineal system. It's common for couples to co-habit rather than marry, so it's all too easy for men to walk away from their family with no sense of responsibility for the children who bear their mother's name. Kate is helped by a local journalist to understand the growing problem of single mothers in Shillong and is taken to meet a group of women who have had to resort to sex work.

It seems that the system is disenfranchising men which is having a serious impact on both sexes. One Khasi man tells Kate about the pressure of being married to a Khatduh. When his wife's parents fell ill, she had to leave their home in Shillong to look after them in their village far way. Without any wealth of his own he had often felt inadequate around her family. He didn't want to leave his job as a porter in the local state hospital, so they were forced to separate. In an emotional scene, while Kate is speaking to the man, his wife arrives and tells Kate that she wishes they could live together as a family.

Before Kate leaves she meets up with the inspector and two of her children, including the all-important youngest daughter, the next Khatduh. She believes that the system must adapt, that wealth should be shared equally, but is adamant that one key tenet remains the same: children should retain the mother's family name and continue the female lineage.