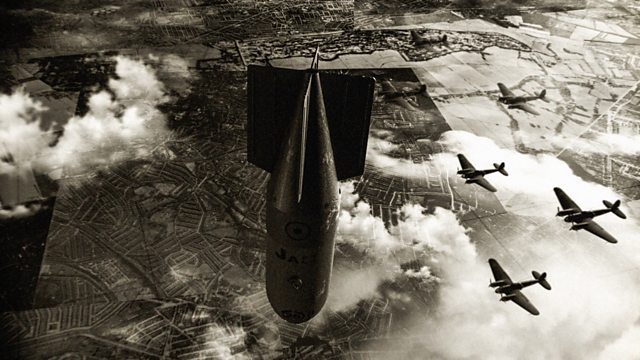 Blitz: The Bombs That Changed Britain Series 1
Episode 1 of 4

Documentary series examining the impact of four individual bombs during the Blitz. This episode follows a bomb that fell on Martindale Road in East London on the first night.

During the Blitz over 450,000 bombs dropped on Britain and every bomb has its own story. This series examines the specific effect of four bombs, from their initial impact on individual lives right through to their wider consequences for the Second World War and all the way to the present day.

Each episode begins with a single bomb in a single street in a single place - London, Hull, Clydebank and Bristol. Across the series personal testimony, memoirs and the records kept at the time provide a visceral and terrifying account of the Blitz that directly connects with the human experience of the bombs. As survivors and relatives attest, these bombs touched the lives of everyone and created a legacy we all still live with today.

Episode one follows a bomb that fell on Martindale Road in the East End of London on the first night of the Blitz. Stan Harris and Norman Pirie were boys in 1940, but their memories of that night are crystal clear.

Initially there was relief as this bomb remained unexploded and Martindale Road residents were evacuated. Sandra Belchamber's grandparents were caught up in the chaos and she explains their decision to leave London and to head for Kent. But Judy Gregory's grandmother, uncle, aunt and cousins put their faith in the authorities and headed to a local school to wait for buses to take them to safety. The buses did not come and they and hundreds of others became a sitting target for returning bombers. One man - journalist Ritchie Calder - tried to warn the authorities that the school was a tragedy waiting to happen, and when the bombers did return they scored a direct hit, killing hundreds.

Judy was moved to tears when she discovered that her family story is outlined in terse civil defence dispatches held in the local archives. An entire branch of her family tree is lost, a tragedy that ironically stemmed from a bomb that didn't go off.

Calder was determined to publicise the human cost of this bomb and those that did go off. His two grandsons explore his mission to explore the real problem London faced in the first weeks of the Blitz; the thousands of people who had lost absolutely everything including their homes. For the first time it was necessary to create city-wide welfare systems that work for everyone. This film explores the work of one exceptional MP who put these systems in place in record time and joined the call for a National Health Service.

See all episodes from Blitz: The Bombs That Changed Britain

Find out more about 'rubble women', Germany's hidden bombs and watch clips about the making of the series

Visit OpenLearn to find out more and watch our making of clips.