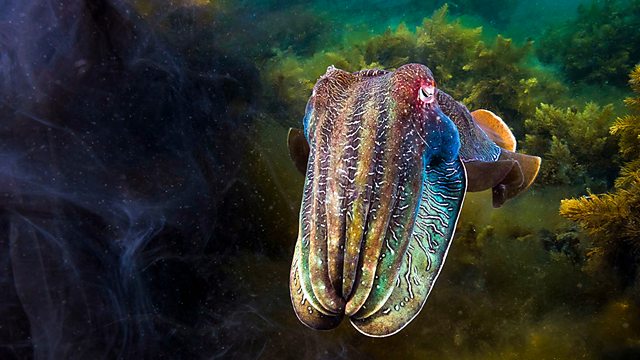 The wildlife series narrated by David Attenborough explores the planet's green seas. From enchanted forests to undersea prairies, they teem with life.

It's our green seas, not the blue, that bring life to our oceans. Here sunlight powers the growth of enchanted forests of kelp, mangroves and prairies of sea grass. They are the most abundant but fiercely competitive places in the ocean to live.

The most bountiful kelp forests are found off the tip of southern Africa, where two great oceans collide. Almost a hundred different species of shark patrol these waters, driving one resident - the common octopus - to become the ultimate escape artist. To outwit her nemesis, the pyjama shark, she uses ingenious tactics, never filmed before.

Along the Pacific coast of North America stand, at 60 metres high, the largest and perhaps most diverse kelp forests in the world. In clearings, bright orange male Garibaldi fish guard territories of short turf seaweed. When spiny urchins invade and graze their crops, the Garibaldi desperately pick them off. But urchins can swarm in vast numbers and even attack and fell the kelp forest itself, creating vast 'urchin barrens'. All is not entirely lost, thanks to the return of a ravenous forest resident - sea otters. Back in the late 1800s, sea otters were hunted for their thick pelts to near extinction. And with them gone, urchin numbers rose, destroying many forests. Today, thanks to protection, sea otter numbers are recovering, along with the health of the forest. In a filming first, we reveal great rafts of sea otters now numbering in their hundreds.

In warmer waters another green sea takes hold. Off Western Australia, vast prairies of seagrass extend to the horizon. Here, grazing green turtles are stalked by tiger sharks. By keeping turtles on the move, tiger sharks prevent the seagrass meadows from being overgrazed. In this way, sharks have become surprising allies in the fight against climate change - as a patch of sea grass is 35 times more efficient at absorbing and storing carbon than the same area of rainforest.

Once a year, one sea meadow in Australia is overrun by an extraordinary invasion. With the first full moon of winter, strange creatures emerge from the deep - spider crabs. The army marches into the shallows and starts to pile one on top of each other, building mounds over a metre high. They then moult. Soft-bodied and weakened, they must avoid the patrolling four-metre-long stingrays.

Further along the coast, the greatest gathering of cuttlefish in the world takes place, as males battle it out for the right to mate. But even among these giant cuttlefish, the largest of their kind, it's not always size that counts. A smaller, sneaky male uses subterfuge, even pretending to be a female, to confuse rivals and get his girl. Even raising your young can be tough in such a competitive place. A weedy seadragon sets out on an epic quest to give his young the very best start in life.

Vast numbers of the ocean's baby fish start their lives in the green seas. The richest nurseries of all are the mangrove forests. Straddling the boundary between land and sea, they provide shelter for the juvenile fish. But in the mangroves of Western Australia lives a deadly assassin - the 40cm-long zebra mantis shrimp. In a surprising story of betrayal, a male shrimp will abandon his mate of possibly 20 years, trading up for a larger female.

And there is one other green sea that supports more life than all the rest combined. Unlike the mangrove forests and prairies of sea grass, its existence in the open seas is only temporary. Microscopic algae flourish into vast blooms, providing a feast for plankton-feeding fish like billions of anchovies. In Monterey Bay, California, the giant shoals draw in thousands of dolphins, sea lions and humpback whales who all race to claim their share of the feast.

See all clips from Green Seas (3)