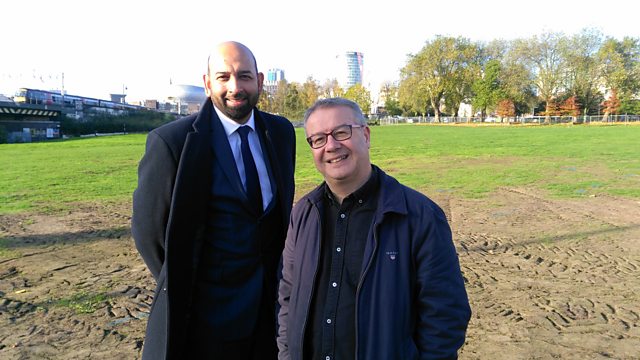 Adrian Goldberg travels around Birmingham meeting with fellow Brummies, all of whom have a special vision for the future of Birmingham's landscape.

Adrian Goldberg travels around Birmingham meeting with fellow Brummies, all of whom have a special vision for the future of Birmingham's landscape. He begins on a huge piece of blank wasteland in the very heart of the city centre which is waiting to become the home of the Birmingham terminal for HS2. He's joined by Waheed Nazir from Birmingham City Council to consider how the anticipation of HS2 is already changing Birmingham's skyline as well the city's sense of its own future.

Adrian joins the Birmingham Trees for Life team in a park on the far Eastern rim of the city. The team have coordinated the planting of over 70,000 trees in Birmingham over the past 10 years with many groups of children and volunteers.

His next stop is to Britain's first retrofit zero carbon house, just 2 miles out of the city centre in Balsall Heath. Architect John Christophers has a special interest in Sustainable Architecture, and his recently built family home is an inspiring vision of how existing housing stock could be transformed to become carbon neutral homes. When an architectural critic from The Times visited this house he said: "I have seen the future, and it's in Birmingham".

Adrian's next visit is to the Apple Day at the Queen Elizabeth Hospital. This is the brain child of HR manager Antony Cobley who has led an initiative to plant orchards and gardens around the hospital grounds for patients and relatives to the hospital.

Sutton Park is one of Europe's largest urban parks and is 9 miles to the north of the city centre. Here Adrian joins a group of Rangers and volunteers on a project to transform a dense wood of holly which hasn't been coppiced for over 200 years, to an open woodland of ancient oaks and newly planted rowan trees.