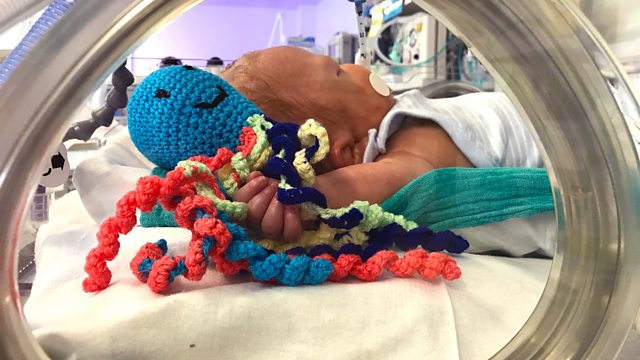 Programme that offers a female perspective on the world. How does a knitted octopus toy help premature babies in hospital?

Some hospitals in the UK are now giving crocheted octopus toys to premature babies to calm them. The babies touch these toys in a similar way they played with the umbilical cord in the mother's womb and it stops them from disrupting medical equipment and tubes. The idea originated in Denmark and in the UK Emma and Mark Ripley were among the first parents to receive one for their son Luke. Our reporter, Blanche Girouard went to meet them.

With sexual harassment allegations dominating the headlines, how should we be talking to our children about their sexual rights and responsibilities? In a short series with Relationships and Sex Education Specialist Rachel Fitzsimmons, we discuss how to have this conversation with children of different ages. Today, Jane and Rachel discuss 5-8 year olds.

Referred to as one of the most important feminist artists working in Britain today, choreographer and director Charlotte Vincent joins Jane to discuss her new work 'Shut Down' that examines notions of masculinity through dance.

'Wonder', a new film based on the best-selling book by R J Palacio, tells the story of a ten year old boy with a facial disfigurement going to mainstream school for the first time. So how does that feel? According to a survey by charity Changing Faces, almost half of the people they asked experienced bullying at school due to a disfigurement. Jane speaks to 13 year old Marcus, who was born with a facial cleft and cleft palate, and his mother Sam and Elizabeth Noble from Changing Faces.

The lives of vulnerable women and children will be put at risk by proposed changes to funding for refuges, according to warnings from charities and abuse survivors. The government is proposing to remove refuges and other forms of short-term supported housing from the welfare system. Jane gets reaction from Katie Ghose, the chief executive of Women's Aid.

Weekend Woman's Hour: Joan As Policewoman, Consent for the under-fives

Octopus For A Preemie UK

Refuge – for women and children against domestic violence

Women’s Aid - working together until women and children are safe

FPA - advice for parents and carers