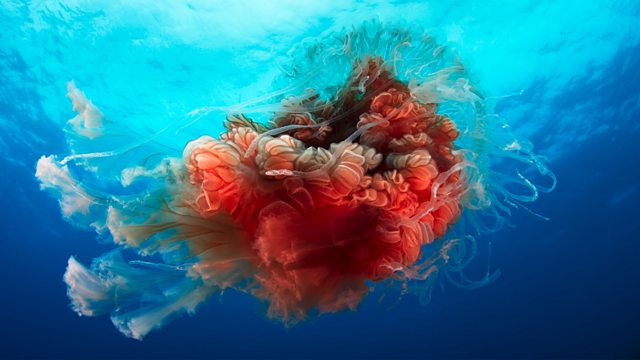 The big blue is the world's greatest wilderness, far from shore and many kilometres deep. It's a vast marine desert where there is little to eat and nowhere to hide. Yet it's home to some of the biggest and most spectacular creatures on earth.

This episode reveals what it takes to survive in this savage and forbidding world. We witness feats of incredible endurance, moments of high drama and extraordinary acts of heart-wrenching self-sacrifice.

Every animal in the big blue must find their own unique way to survive. Sperm whales have the largest brains in the world. They live for 80 years, and we are only now beginning to learn the extraordinary complexity of their language of clicks - thought to coordinate the whole family in everything from childcare to hunting. With special pressure-proof cameras, we witness record-breaking feats of endurance as they hunt for squid a kilometre down into the abyss.

Many smaller creatures find sanctuary in this great wilderness. Only recently have we begun to solve the mystery of where baby turtles disappear to in their early years. They leave the crowded waters of the coast and head to the open ocean, where they use floating debris like logs as life rafts. Here they remain until adulthood, adrift on the high seas in relative safety away from coastal predators.

Over half of all animals in the open ocean drift in currents. Jellyfish cross entire oceans feeding on whatever happens to tangle with their tentacles. The jelly-like Portuguese man-of-war can harness sail power to fish with its deadly tentacles. Sometimes there is a brief explosion of food in this marine desert, but ocean hunters must be fast to make the best of this bonanza. We witness super pods of up to 5,000 spinner dolphins racing to herd vast shoals of lanternfish, briefly caught at the surface where it is thought they spawn. New aerial footage reveals, for the first time, the truth to a centuries-old sailors' legend of the 'boiling seas' - the spectacular feeding frenzy of 90kg tuna and dolphins smashing through the lantern fish shoals turning the sea white with foam.

Raising your young in this great wilderness is a huge challenge. The episode follows two very different ocean voyagers that show amazing care. We get closer to solving the mystery of where the biggest fish in the sea, the whale shark, gives birth. The pregnant females make an epic journey across the Pacific to the Galapagos Islands. Scientists now think it might be here that the pregnant females give birth to their pups in the safety of the depths. And in the freezing south Atlantic, a pair of ageing wandering albatrosses give their all to raise their very last chick.

Yet even in the big blue, thousands of kilometres from land, there is evidence of human activity. An estimated eight million tons of plastic is dumped into the oceans every year. Globe-spanning currents carry it into the heart of every ocean, often with tragic consequences. In the Atlantic waters off Europe we follow a family of pilot whales whose calf has recently died. One possible cause of death is poisoning by its own mother's contaminated milk. As plastic breaks down it combines with other pollutants that are consumed by vast numbers of marine creatures. In top predators like pilot whales, the toxic chemicals can build up to lethal levels.

See all clips from Big Blue (5)