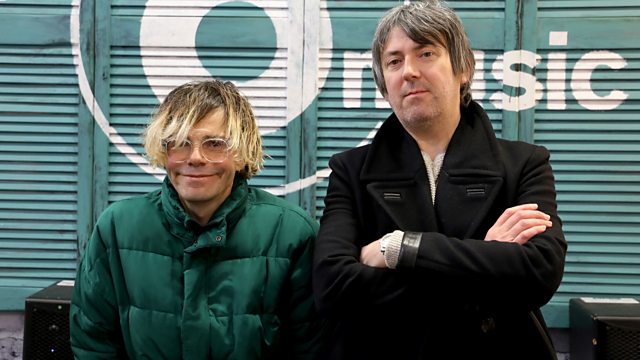 Mark and Stuart are joined by Tim Burgess and Mark Collins of The Charlatans ahead of their latest tour.

Mark and Stuart are joined by Tim Burgess & Mark Collins of The Charlatans. The indie rock band came to prominence in the 1990's with hits including 'The Only One I Know', 'Just When You're Thinkin' Things Over' and 'One To Another'. Their thirteenth album 'Different Days' came out this year and featured collaborations with Paul Weller, Johnny Marr and New Order's Stephen Morris as well as crime novelist Ian Rankin and writer and actor Sharon Horgan. Sharon has been a fan of The Charlatans since she was a teenager and provides backing vocals on the album's title track. Guitarist Mark and frontman Tim chat to Mark and Stuart ahead of their latest tour.

Also on today's show... The Chain, a full of flavour feature with over 7,000 songs in the mix. Could your pick be added next? It's your chance to get involved... AND there's Tea Time Theme Time, where you get to guess what links three songs over a nice cup of tea and a freshly baked scone if you're lucky.

Plus Music News to keep you in the loop of all things in the music biz, and some new music releases, straight out the oven.