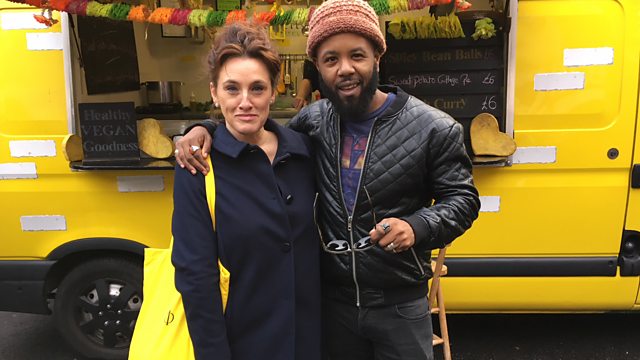 The number of young people turning vegan is rising. Grace Dent meets some of the people opening vegan eateries and asks if this is a trend or a food revolution.

The number of young people turning vegan is rising. Grace Dent meets some of the people opening vegan eateries and finds out how creatives are using social media to further the "vegangelical" cause.

Grace goes to the Hackney Downs Vegan Market to speak to Jay Brave who argues that adopting a vegan diet is as much about personal autonomy and challenging the status quo as it is an ethical step. He delivers a few bars of 'Vegan Shut Up', his parody of Stormzy's 'Shut Up' released on World Vegan Day, and tells Grace why veganism is becoming big in the London grime scene. She also speaks to Sean O'Callaghan AKA Fat Gay Vegan who set-up the market and has seen its popularity grow, and gives his reaction to the mainstream restaurants who are falling over themselves to come up with vegan menus.

Ian Theasby and Henry Firth from Bosh! create simple and imaginative vegan recipes which are filmed and broadcast to over 1.4m Facebook users. Toby Field visits them at their studio to find out what fuels their idea to create plant-based options and to ask why they keep out of the argument around the ethics of veganism.

Maria Rose has just opened a vegan cafe in Barnstaple and explains how it's slowly creating a more enlightened scene in North Devon.

So is this just a trend that's fine for the hipster herbivores of Camden, or can it gain traction across the country and start a food revolution?

Food on the Edge (A Food Story Mix-Tape)