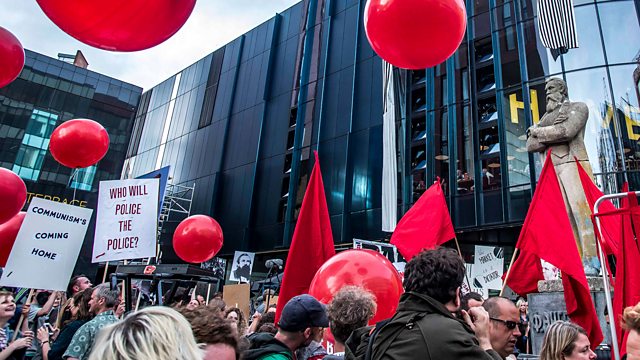 Ceremony: The Return of Friedrich Engels

Artist Phil Collins returns Engels to Manchester, the city where he made his name, in the form of a Soviet-era statue, driven across Europe and permanently installed in the centre.

Friedrich Engels arrived in Manchester in 1842 and documented the plight of the city's working classes in The Condition of the Working Class in England (1845).

172 years later, Turner Prize-nominated artist Phil Collins is returning Engels to the city where he made his name - in the form of a Soviet-era statue, driven across Europe and permanently installed in the centre of Manchester as the closing event of this year's Manchester International Festival.

Collins's film for BBC Four not only documents the statue's journey, but also the lives of Manchester workers today as well as a live inauguration event specially created by Collins to welcome the statue to the city. It includes a soundtrack by Mica Levi (Jackie, Under the Skin) and Demdike Stare, and a new anthem composed by Gruff Rhys (Super Furry Animals).

The film marks 100 years since the ideas in The Communist Manifesto, written by Engels and Karl Marx, changed the course of history by inspiring the Russian Revolution.