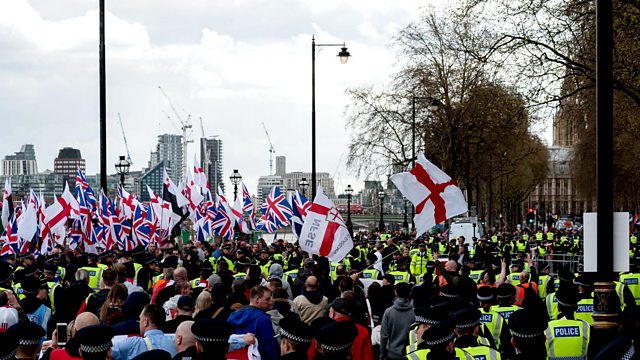 As police warn about a growing threat from the far right, Adrian Goldberg investigates the new face of extremism and the risks they pose to the UK.

The head of counter terrorism Assistant Commander Mark Rowley has warned the extreme right wing pose a growing threat in the UK. He told the Home Affairs select committee last month that right wing issues had increased in the last two years which was a real concern, although Islamic extremism remained the main threat.

Last month, two men alleged to be members of National Action - a banned extreme far right group - were charged in connection with an alleged plot to kill an MP.

Adrian Goldberg investigates the current face of the far right in the UK today and hears from their victims.

He meets the former soldier who intervened after a far right extremist tried to behead a Sikh man and challenges the Austrian leader of a group called Generation Identity which launched in the UK only last month.

They are part of a Europe wide group of so called 'Identitarians' who say their aim is to protect cultural identity. But their target is clear. Members unfurled a banner over Westminster bridge in London which declared "Defend London, Stop Islamisation."

Experts say there is now growing cross border co-operation between far right groups in Europe, the UK and America.

Jewish communities are also worried about the rise in the far right and growing anti-Semitic attacks. A student who highlighted far right posters being put up at her university was forced to move after a hate campaign which included her face being superimposed on pictures of holocaust victims. Businesses have been firebombed and some members of the Jewish community say they are so concerned they are considering leaving the country.

The programme reveals new research on the scale of far right extremism on-line. Thousands of people in the UK have been identified as having violent extremist thoughts. Former extremists have been brought in to try to persuade people to change their views. But are they listening?

Paradise Papers: Profits from the Poor

As police warn about a growing threat from the far right, Adrian Goldberg investigates the new face of extremism and the risks they pose to the UK.
Read the transcript