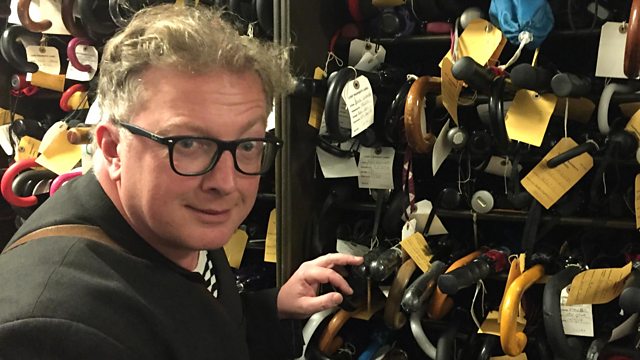 Being Human: The Lost Luggage Office, Ghosts and Warrior Poets.

Matthew Sweet travels to Canterbury, Portsmouth and the TFL offices in search of stories of the lost and found as part of the Being Human Festival running across UK universities.

Stories of objects, ghosts and histories lost and found recorded on location in Portsmouth's most haunted house, the site of a sacrifice in Canterbury and at the TfL Lost Luggage Office. Presenter Matthew Sweet meets academics taking part in Being Human which showcases research from universities around the UK.

How can the reflections of a warrior-poet from the distant past and the adventures of an Iron Age tribesman from the far future help us rethink our relationship with a city centre in the Britain of today? Matthew Sweet travels to Canterbury to find out.
The Transport for London lost property office is a labyrinthine cornucopia hidden away under the streets of central London. A visit there leads to reflections on our complicated relationships with things in a consumer society dominated by mass-produced goods, and the history of the concept of lost property casts a revealing light on the development of the city as an ordered space.
And, some say that Wymering Manor in Portsmouth is one of the most haunted houses in the country. Whether that's true or not, Matthew goes there to examine the ways in which the past of a building intrudes into its present.

Being Human: Lost and Found in the Archives

See all clips from Being Human: The Lost Luggage Office, Ghosts and Warrior Poets. (3)

Being Human Festival - What's On