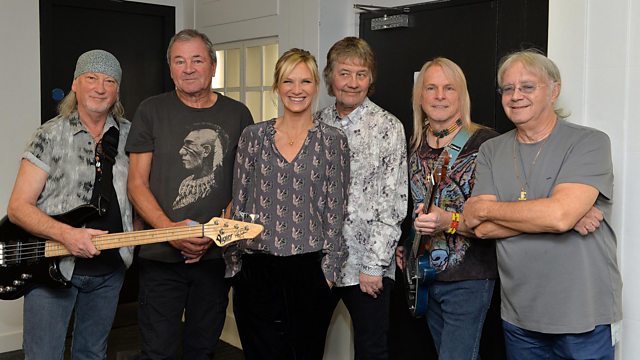 Jo Whiley presents Deep Purple's recent concert at the BBC Radio Theatre. One of rock's all-time greats, they perform some of their biggest hits from the past five decades.

Jo Whiley presents highlights from Deep Purple's recent concert at the BBC Radio Theatre. One of the biggest names in rock, they perform some of their biggest hits from the past 5 decades. These include Black Night, Hush, Perfect Strangers, Bloodsucker and the classic, Smoke On The Water as well as tracks from their latest album, Infinite.

Before their November performance, the band's drummer and founding member Ian Paice said: "We're really looking forward to performing for BBC Radio 2 In Concert. It's been many years since we did something like this. But through all those years one thing has never changed. Playing live is the only way to capture the spirit of Rock n Roll music, because even 60 years after it reared its wonderful rebellious head that's what it still is! There is no safety net of the recording machine to 'fix things later', you get it right or get it wrong. For the musicians it's, an adrenaline rush, concentration and invention, but most of all it's fun. That's why we started doing it when we were kids. We hope you have fun too being on the receiving end."

The recent series of special In Concert performances were held to mark BBC Radio 2's 50th birthday, featuring a line-up of legendary performers from the past 5 decades.