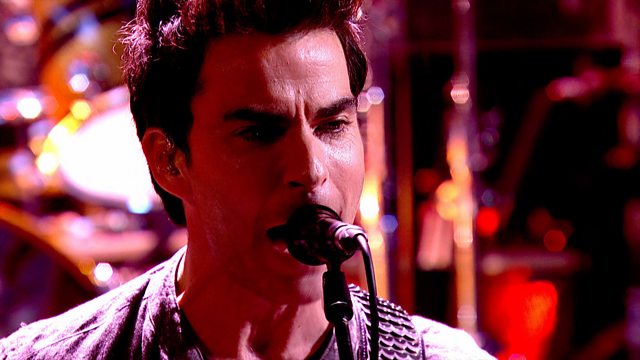 On this week's show, Welsh rockers Stereophonics, who are celebrating the 20th anniversary of their 1997 debut album Word Gets Around, return with tracks from their tenth studio album Scream Above the Sounds, which frontman Kelly Jones has described as an anthemic record to mark this milestone.

New Orleans folk-blues band Hurray for the Riff Raff also perform, with tunes from their new, sixth album The Navigator. Led by frontwoman Alynda Segarra, their Americana sound paves the way for political anthems inspired by time living in New York and her Puerto Rican heritage.

Making his TV debut is California-born, Ghana-raised Moses Sumney, whose heavenly falsetto has already won the hearts of the likes of Beck and Solange Knowles. His much-anticipated debut Aromanticism, which has just been released, has been described as genre-defying and was written in a variety of places, from Montreal to a boat in Nicaragua.

Returning to the show is celebrated British guitarist and songwriter Richard Thompson, who performs a track or two from his Acoustic Classics Vol II collection, which sees him revisit many of his songs in a stripped back and solo way.

Making her debut on the show is Japanese pianist extraordinaire Hiromi, who is known for her virtuosic technique and energetic live performances. Although she was classically trained, her introduction to jazz at an early age means her music and shows are a mix of musical styles and genres, and have seen her perform with the likes of Chick Corea.

Californian singer-songwriter Jake Smith, who goes by the moniker of The White Buffalo, plays a song or two from his sixth country-tinged rock LP Darkest Darks, Lightest Lights, and award-winning jazz vocalist Zara McFarlane returns to the show with songs from her third album Arise, which traces her musical heritage of the Caribbean and explores her take on the musical possibilities of British-Jamaican identity.