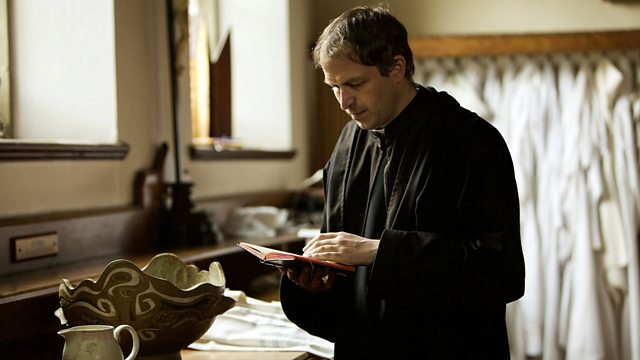 Retreat: Meditations from a Monastery Series 1
Episode 3 of 3

Series going in search of inner peace in three Benedictine monasteries. One monk is a renowned iconographer, while the other creates manuscripts and rosaries.

Belmont Abbey is a Benedictine monastery in Herefordshire on the Welsh border. The monastery itself has a warm and inviting feel which is amplified by the colourful, 19th-century decor inside the building. The monks that we follow at Belmont are true craftsmen - one is a renowned iconographer and one of the best in the western world, while the other creates manuscripts and rosaries.

We follow renowned iconographer Father Alex who travels to Belmont from his native Peru every year to teach his skills. He is the superior of Belmont Abbey's sister monastery in Peru. He uses centuries-old techniques - mixing his own egg tempera paints, using pigments made from semi-precious stones and burnishing gold leaf - to create a striking icon of Archangel Michael, the patron saint of Belmont Abbey.

We also meet Brother Bernard who makes rosaries - a devotional string of beads used in prayer. He uses pliers to link the beads, intricately threading them together to form the set of rosary beads which he then uses in private prayer.

Belmont Abbey's abbot, Father Paul, is responsible for the day-to-day running of the monastery. The majority of his duties are pastoral and religious, including running the services which take place throughout the day, leading the silent meals and creating an environment in which the monks can live and work in peace. He's also a dog lover and can often be seen walking his dog Toby through the monastery grounds. 'A wise man is known by the fewness of his words.' (Rule of St Benedict)

See all clips from Belmont Abbey (3)