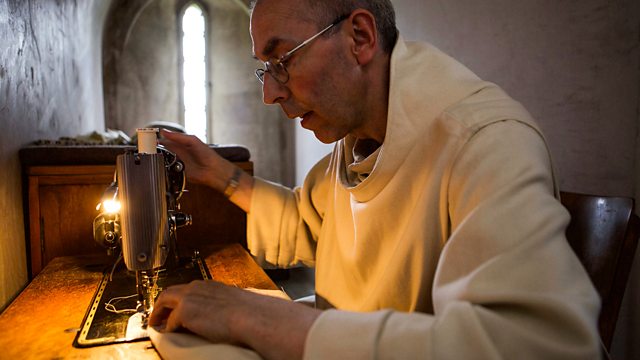 Retreat: Meditations from a Monastery Series 1
Episode 2 of 3

Series going in search of inner peace in three Benedictine monasteries around Britain. At Pluscarden, the monks grow their own crops and make their own clothes.

Pluscarden Abbey is a remote Benedictine monastery on the edge of the Scottish Highlands in Moray and is home to 21 monks. It is the oldest practising monastery in the United Kingdom, dating back to the medieval era. The monks live by the 6th-century Rule of St Benedict and life has changed little in hundreds of years.

Given its isolated and weather-beaten position, the abbey is almost entirely self-sufficient. The monks grow their own crops, make their own clothes and have little contact with the outside world. Unlike most Benedictine monks who wear a black habit, the monks at Pluscarden Abbey wear white, a symbol of their austerity and strict interpretation of monastic life.

We follow a typical day in the life at Pluscarden Abbey - from the moment one monk knocks on the doors of the brethren and chants in Latin to wake them up for the first service of the day at 4.15am right up to compline, the final service of the day before the monks retire to bed.

Brother Michael is Pluscarden Abbey's resident tailor and weaver. Creating garments is his passion and we watch as he makes a distinctive white habit for another monk - measuring and cutting the material, hand stitching the design on an old sewing machine and finally washing it and presenting it to another monk. He also weaves a striking purple and white stole, a vestment worn around the neck by priests when giving confession, on an antique braid loom housed in one of the abbey's workshops.

Father Benedict served in the British army before becoming a monk at the age of 25. He is Pluscarden Abbey's beekeeper and when he's not attending one of the nine services the monks conduct throughout the day, he can be found at one of the many beehives scattered around the monastery grounds. We follow him as he collects a frame filled with honey from one of the hives and then processes it in his 'honeyhouse' by melting it down and sieving it into jars ready to serve to the other monks at supper. 'Monotonous tasks like going through a beehive are entirely compatible with being in a state of constant prayer.' (Father Benedict)

See all clips from Pluscarden Abbey (4)