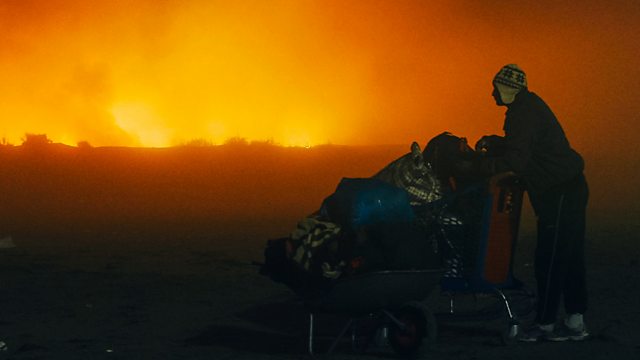 Calais, The End of the Jungle

Filmed deep inside the notorious migrant camp, this film charts the final days of the Calais Jungle as Europe's largest migrant camp erupted into flames.

Filmed deep inside the notorious migrant camp, this film documents the final days of the Calais Jungle as the largest migrant camp in Europe erupted into flames.

A year on from the eviction, five-time BAFTA-winning director Dan Reed charts the impossible dilemmas faced by the French police and the dedicated team of British volunteers largely responsible for the creation of the Jungle. The film shows extraordinary footage of hundreds of migrants storming lorries on the approaches to Calais. It captures the scale of the British volunteer aid effort that resulted in a huge influx of donations in the wake of the Syrian refugee crisis.

Though an orderly eviction was planned, filmmakers captured the chaos correctly predicted by volunteers as shelters were consumed in vast fires. The film explores the impact that the volunteers had on the course of the camp's growth and underground economy. It also asks whether the eviction has actually made anything better. A year on, there are no more roadblocks and there is no more camp. Instead, there is mass homelessness and hundreds of migrants still playing an endless game of cat-and-mouse with the French police.

Part of the award-winning This World strand.

The Balfour Declaration: Britain's Promise to the Holy Land

See all clips from Calais, The End of the Jungle (3)