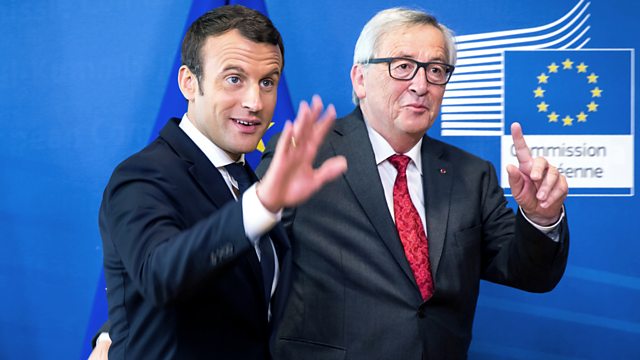 Edward Stourton asks how the European Union might change after Britain leaves and if grand plans for further integration will be achieved.

Edward Stourton asks how the European Union might change after Britain leaves. "The wind is back in Europe's sails", according to European Commission President Jean-Claude Juncker. In September, in his annual address to the European Parliament, he set out a bold dream for the future. Soon afterwards it was echoed by another, this time from French President Emmanuel Macron who declared that "the only path that assures our future is the rebuilding of a Europe that is sovereign, united and democratic". Amongst the proposals that the two leaders put forward were a European budget run by a European finance minister, an enlargement of the Schengen passport-free travel zone, and much closer collaboration on tax, defence, and a host of other issues.

But at present, the European project faces huge challenges. Britain is about to leave the EU, whilst Catalonia's bid for independence is causing turmoil in Spain. In the face of such developments, how realistic are the grand visions that Europe's leaders have for the future of the continent?