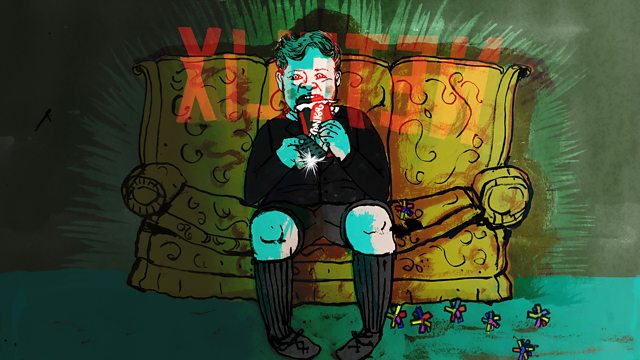 Aleks Krotoski takes a step back in evolution to understand our insatiable appetite for digital content. How are our buttons being pushed and how can we learn to push back?

For many of us the modern world is thankfully one of abundance, where we can indulge ourselves at every turn. But why is it so difficult to say when we've had enough; of foods we know aren't good for us, of TV programmes that play the next episode automatically, of the fleeting social connections we get through online platforms?

As advanced as our technological world has become our brains haven't evolved much since we lived on the African Savannah. And all the things that we sought out to survive there remain hardwired into us today. And it's the consequences of that Aleks will explore.

Some of the tricks nature plays on us go even further back in evolution. Take the humble if duplicitous Cuckoo, laying eggs in another bird's nest. When hatched the cuckoo chick's mouth is that bit wider, that bit redder than those it's sharing the nest with (should any other chicks have survived). The result is the deceived parents will feed it preferentially as the best bet for survival. That extra redness and wider gape is an example of a phenomena in animal behaviour called super normal stimuli. We encounter something we like but with its attributes boosted and we go mad for it, there numerous examples across the animal kingdom.

The difference with humans is we've learnt to super-normally stimulate ourselves; with foods with more sugar and fat than occur in nature, with images of the opposite sex carefully manipulated to make them even more arousing. We've mastered how to push our buttons and we do it, or have it done to us repeatedly.

Aleks sees how this plays out across a range of experiences from the playing of slot machines to competitive eating, to learn the tricks being played on us and how we might outsmart the tricksters.

Adam Alter is an associate professor of marketing and psychology at New York University’s Stern School of Business, and the Robert Stansky Teaching Excellence Faculty Fellow. He is the New York Times bestselling author of IRRESISTIBLE and DRUNK TANK PINK.
He talks to us about how design can keep people in a repetitive loop of ‘engagement’ even when it’s not pleasurable.

Deirdre Barrett is psychologist on the faculty of Harvard Medical School's Behavioral Medicine Program and author of Supernormal Stimuli: How Primal Urges Overran Their Evolutionary Purpose.
She explains how the caveman brain reacts in a technological landscape full of supernormal stimuli.

Dr. Poppy Crum, is Chief Scientist at Dolby Laboratories.  She also holds an appointment as Adjunct Professor at Stanford University in the Center for Computer Research in Music and Acoustics and the Program in Symbolic Systems. At Dolby, Poppy directs the growth of internal science. She is responsible for integrating neuroscience and sensory data science into algorithm design, technological development, and technology strategy. She is a 2017 recipient of the Consumer Technology Association’s Technology and Standards Achievement Award for work towards the introduction of over-the-counter hearing-aid devices, and has been named to Billboard Magazine’s 100 most powerful female executives in the music industry.

She tells us about the discoveries she and her colleagues have made about how humans react physically and emotionally to the technology - which can be be used to create rich and engaging experiences.

Rhidian is Curator of Public Programmes for the BFI, and an avid Alfred Hitchcock fan. He tells us how Hitchcock manipulated the minds of his audience by pushing the boundaries of psychology and cinema technology.

And if you want your mind hacked by Hitchcock, the BFI will be screening it in select cinemas as part of WHO CAN YOU TRUST?, a BFI season of thrillers running until the end of the year, which also includes other classic Hitchcock films and new documentary 78/52

David is Professor of Behavioural Biology at the University of Aberdeen.

He tells us how other members of the animal kingdom react to supernormal stimuli, and why our brains are wired to respond to particular types of stimulus.

He shares with us how he manages to eat gargantuan amounts of food despite his body and brain telling him to stop, and how competitive eating is much more complicated than the evolutionary urge to feast.

Natasha Dow Schüll is a cultural anthropologist and associate professor in the department of Media, Culture, and Communication at New York University. She is the author of Addiction by Design: Machine Gambling in Las Vegas (2012), an ethnographic exploration of the relationship between technology design and the experience of addiction. Her current book project, Keeping Track (forthcoming), concerns the rise of digital self-tracking technologies and the new modes of introspection and self-governance they engender. Her research has been featured in such national media venues as 60 Minutes, The New York Times, The Economist, The Financial Times, and The Atlantic.

She explains how technology is akin to the design of slot machines, and how the same elements that can keep people in ‘the zone’ in a cassino can apply to the devices we all carry around in our pockets.