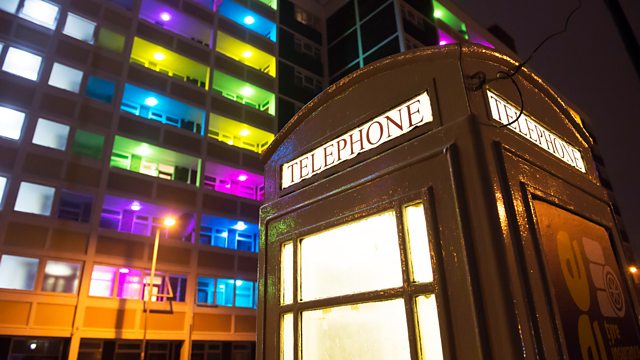 I Wish to Communicate with You

The I Wish to Communicate with You light installation has brought colour to a Hull housing estate allowing, as Kofi Smiles shows, residents to feel part of the City of Culture.

The Thornton Housing Estate is five minutes walk from Hull City Centre, but is isolated both physically - by the arterial roads around it - and socially, thanks to a long-standing reputation for anti-social behaviour. It's a reputation the residents feel is unjustified, and as part of the City Of Culture they have sent out a message to the rest of the city in the form of a lighting installation called 'I Wish To Communicate With You'. Modelled on maritime flags used by local mariners for centuries, the project has seen the white lights in the walkways and public areas of the tower blocks transformed into various colours through the use of simple plastic filters - but that simplicity belies the impressive overall impact of the hundreds of lights seen together. Kofi Smiles, the BBC's face of Hull 2017, follows the fortunes of the project from January through to the Autumn, and watches as it spreads into other locations across the city. He hears from residents about the impact of the project and the extent to which is has made them feel - unexpectedly - like a vital part of the year long artistic celebrations.

See all episodes from Hull 2017