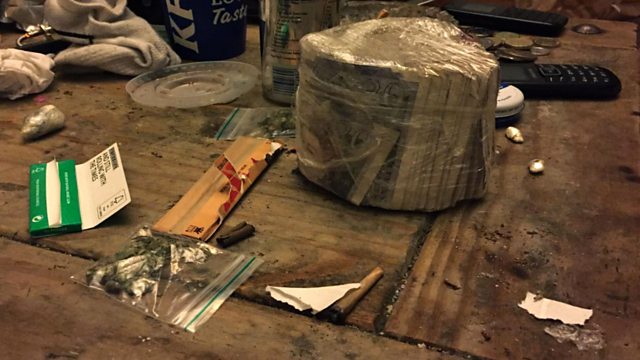 Simon Cox investigates how drug dealers from big cities are using teenagers and vulnerable people to expand their criminal networks to rural areas.

Drug dealers from big cities are exploiting thousands of teenagers to traffic Class A drugs to smaller rural towns in what's known as County Lines.

Children - some as young as 9 -are being used as runners to move drugs and cash from cities like London and Manchester hundreds of miles away to other areas of the UK.

It's a massive problem which until recently was being ignored.

File on 4 hears from some of the exploited young people who spent their teens travelling around the UK for months at a time living in drugs dens selling heroin and
crack cocaine.

They do this by taking over the homes of vulnerable people - drug users or the elderly - to sell drugs from and then refuse to leave -a practice called 'cuckooing' which can have tragic consequences.

These trafficked children often find themselves trapped by the gangs unable to escape because of the threat of violence or in order to pay back debts.

Are the authorities are doing enough to protect children from being exploited in this way? Or are they being let down by being viewed as criminals themselves rather
than the victims of organised crime?

The Nuclear Option - Powering the Future and Cleaning Up the Past

Simon Cox investigates how drug dealers from big cities are using teenagers and vulnerable people to expand their criminal networks to rural areas.Read the transcript