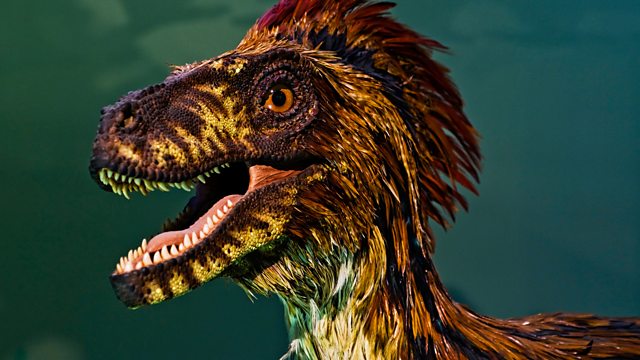 Melvyn Bragg and guests discuss theories about dinosaur feathers. Which ones had them, what sorts of feathers were they and where were they found on their bodies?

In a programme first broadcast in 2017, Melvyn Bragg and guests discuss the development of theories about dinosaur feathers, following discoveries of fossils which show evidence of feathers. All dinosaurs were originally thought to be related to lizards - the word 'dinosaur' was created from the Greek for 'terrible lizard' - but that now appears false. In the last century, discoveries of fossils with feathers established that at least some dinosaurs were feathered and that some of those survived the great extinctions and evolved into the birds we see today. There are still many outstanding areas for study, such as what sorts of feathers they were, where on the body they were found, what their purpose was and which dinosaurs had them.

Mike Benton
Professor of Vertebrate Palaeontology at the University of Bristol

The Congress of Vienna

Mike Benton at the University of Bristol

Steve Brusatte at the University of Edinburgh

Feathers, melanosomes, and the colour of dinosaurs - Palaeobiology Research Group

Do dinosaurs still live among us? – BBC iWonder

Living dinosaurs: How birds took over the world – New Scientist

The taphonomy of colour in fossil insects and feathers by Maria E. McNamara (Palaeontology, 2013)

Darren Naish and Paul Barrett, Dinosaurs: How They Lived and Evolved (The Natural History Museum, 2016)