Schedule
BBC Radio 2
Who is My Neighbour?
Main content 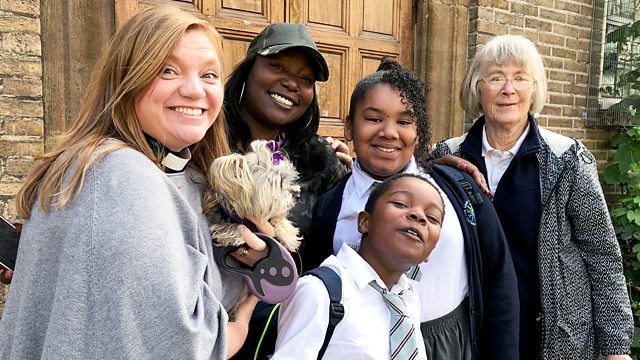 Who is My Neighbour?

For Faith in the World Week, the Rev Kate Bottley explores who are our neighbours in the 21st century.

The Rev Kate Bottley takes to the streets of Britain to find out who really knows their neighbour. She meets students leaving home for the first time, living in a strange city with people they have never met before; what does being a neighbour mean to them?

She will also explore what the main world faiths teach about being a good neighbour from the Good Samaritan to the Ummah. Kate visits some of the small scale projects up and down the country run by faith groups that are building neighbourhoods that are stronger and more resilient before.

In Salford, Kate is invited into the home of a refugee family who tell her how they had to flee Syria when the civil war started. After four years in a refugee camp in Lebanon, Samir and his young family were eventually granted permission to settle in the UK last year. The church community that helped Samir and his family tell Kate why they believe that neighbourly values extend to those in other parts of the world too.

Kate will also look at the end of one community and the birth of another through tragedy as she talks to faith leaders and residents caught up in the Grenfell fire. The Rev Dr Alan Everett opened the doors to his church to offer shelter to those affected.

Rabbi Moshe Freedman from the New West End Synagogue tells Kate why his faith drove him and others to support those caught up in the fire but he also explains why he fears communities and neighbourhoods risk becoming divided and damaged.

Folk and Blues singer and guitarist Benjamin William Pike will perform his own take on 'who is my neighbour' for Kate as he talks about his experiences of being rebuffed when he tried to integrate into a new community.