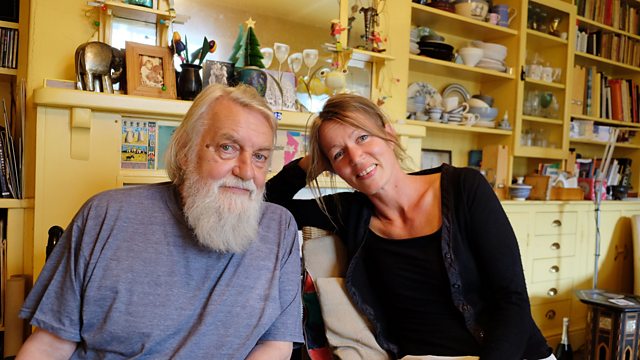 Verity Sharp heads to the edgelands of Lincolnshire for a special programme recorded at home with one of the most distinctive voices in British songwriting, Robert Wyatt.

Verity Sharp heads to the edgelands of Lincolnshire for a special programme recorded at home with one of the most distinctive voices in British songwriting, Robert Wyatt. A pivotal figure in the alternative music scene of the last 50 years, Wyatt has had a profound influence on the history of British music. But he's also one of its most affable story tellers. Over a plate of local plum cake, Wyatt talks Verity through some of the music that has helped shape him as an artist and the stories that go with it. With the ease of someone who is as comfortable reciting nonsense verse as discussing the Syrian crisis, he swings from surrealist verse by Hilaire Beloc to the time when Bjork came to visit him in Louth.

Robert Wyatt came to prominence in the late 1960s as the drummer with the jazz-infused psychedelic band Soft Machine before a debilitating accident in 1973 left him paralysed from the waist down. He went on to make some of the most startling music in his repertoire, abandoning the drum kit in favour of piano and a haunting vocal style. He became known for his unique voice and a playful way with words - qualities that run through his eight solo albums, which veer from the fiercely political to the childlike and surreal. Although probably most famed for his vocal part on the Elvis Costello-penned hit 'Shipbuilding', Robert Wyatt's influence stretches far beyond that, having worked with American jazz composer Carla Bley, Icelandic artistic powerhouse Bjork and Japanese composer Ryuichi Sakamoto as well as jazz musicians fleeing apartheid South Africa, and long-time friend Brian Eno.

Over the course of an hour and a half he looks back on the last 50 years of his life as an artist and an avid music collector, picking out selections dear to his heart - from his love of British tenor Peter Pears to his fanaticism for early jazz singers and Ivor Cutler's absurdism. Verity also brings some of her own choices, sparking discussions around British surrealism, his dislike of the 'wobbly singers' of opera, his undying love for life partner Alfie and a frank conversation about his battle with depression, before giving us a quick piano lesson to boot. An intimate portrait of a truly British voice with a love of the absurd and an ear for the unusual.