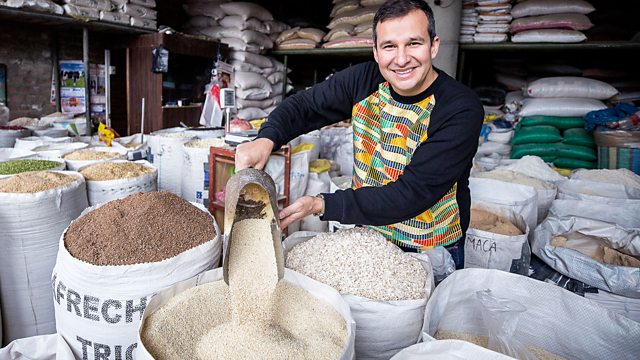 Documentary. Peruvian-born chef and record producer Martin Morales heads back to his homeland to explore the inherent link between food and music in Andean culture.

Peruvian-born chef and record producer Martin Morales heads back to his homeland to explore the inherent link between food and music in Andean culture.

For the first part of his trip, Martin is accompanied by his 10 year old son and budding radio producer Felix, 8 year old daughter Tilly and his wife Lucy. He shows them round his family's favourite haunts - from the famous La Chomba restaurant in Cusco where musicians queue up to serenade the diners, to the tiny village of Lamay where they dine on the local delicacy of guinea pig on a stick.

At the Centre for Native Arts in Cusco, food and music come together with a dance about the Oca potato. Providing the soundtrack to the dance is a musician Martin once worked with in his early career, the legendary violinist Reynaldo Pillco.

Along the way, Martin meets up with a recent musical discovery of his, singer Sylvia Falcon, who enchants him with a song highlighting the importance of the Coca leaf in Peruvian cuisine and culture.

Leaving the family holiday behind, Martin continues his journey with his chef's hat on, exploring the food and culture of the Andes - including local delicacies such as the freshest trout roe he's ever tasted.

Martin describes his joy at exploring the traditional picanterias (family-run restaurants) of the Andes as being akin to his joy at discovering a new band. For this former music executive, the roots of Andean culture run deep, where music and food are firmly intertwined. On every step of the journey, Martin is drenched in the music of the Andes - twanging guitars, wood flutes, and even the odd harp provide the soundtrack to mealtimes.

A BlokMedia production for BBC Radio 4.