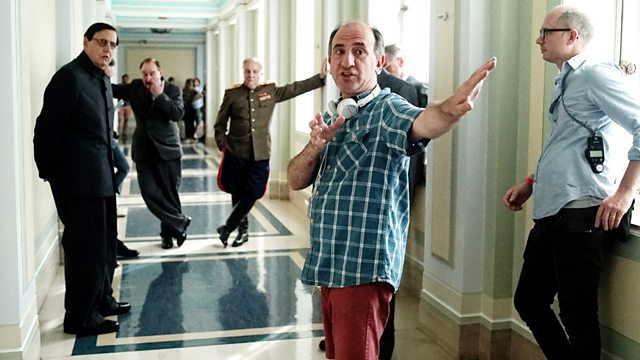 Armando Iannucci on the Death of Stalin, Kwame Kwei-Armah directs Ibsen's Lady from the Sea

Armando Iannucci's new film The Death of Stalin, Kwame Kwei-Armah and Elinor Cook on Ibsen's The Lady From the Sea, controversial form 696 for venues and Sean Hughes remembered.

Armando Iannucci, writer of The Thick of It, discusses his new film satire The Death of Stalin and his love of classical music as explored in his book, Hear Me Out.

Kwame Kwei-Armah has been running the Center Stage Theater in Baltimore and in February will take over the Young Vic in London. Meanwhile he's directing The Lady From the Sea, in a new version by Elinor Cook that transports Ibsen's Scandi drama of a woman's tussle for her independence to the Caribbean. John Wilson finds out why, and what Kwei-Armah has up his sleeve for his new job.

Form 696 is a risk assessment form which the Metropolitan Police requests promoters and licensees of events complete and submit 14 days in advance of hosting some music events. When the form was first introduced in 2005 it proved controversial as it asked for details of audience ethnicity and, although this wasamended later, critics still say the form is discriminatory because grime and urban music artists are disproportionately affected.

As London Mayor Sadiq Khan asks the Met to review the form, and a new report on the state of grime music in the UK is published, we discuss Form 696 and its impact on the grassroots music scene with the Director for the Black Music Research Unit at the University of Westminster, Mykaell Riley and music journalist Hattie Collins.

And we remember the actor and comedian Sean Hughes whose death was announced on Monday.

The Death of Stalin, is in most cinemas
from 20 Oct, cert 15

Lady from the Sea