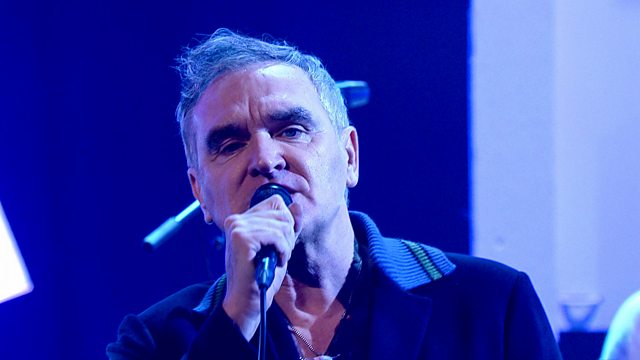 Joining Jools for this week's musical merry-go-round are Brooklyn's The National, who made their debut on the show back in 2005 and have just scored their first number one album with their seventh collection Sleep Well Beast, with songs like Day I Die and The System Only Dreams in Total Darkness, that find the band tackling oncoming middle age and the state of the world with their customary inventive melancholy.

Morrissey appeared on Later's first series back in 1992 and returns for the sixth time with songs like Spent the Day in Bed from Low in High School, his eleventh studio album and his first in three years. The album was produced by Joe Chiccarelli, who has worked with everyone from Frank Zappa to Beck.

Queens of the Stone Age recently scored a number one UK album with their swaggering seventh studio album Villains, and frontman Josh Homme is in crooning mode to offer a unique performance of the closing track, Villains of Circumstance, accompanied by a string quartet and bandmate Dean Fertita.

Alongside these veterans, prepare to meet 19-year-old American pop R&B singer Khalid and his breakout anthem Young Dumb and Broke from his debut album American Teen.

Then make way for the returning Jessie Ware and songs from her third album Glasshouse, which adds a confessional, noir-ish feel to her 80s-influenced soul stylings on songs like Midnight and Selfish Love.

Last but not least, please welcome the inventive keeper of classic country's flame, Marty Stuart, who started out as a 13-year-old with bluegrass legend Lester Flatt and is touring the UK to promote his album Way out West with his band The Fabulous Superlatives. They are performing acoustically in the high lonesome tradition of close harmony.