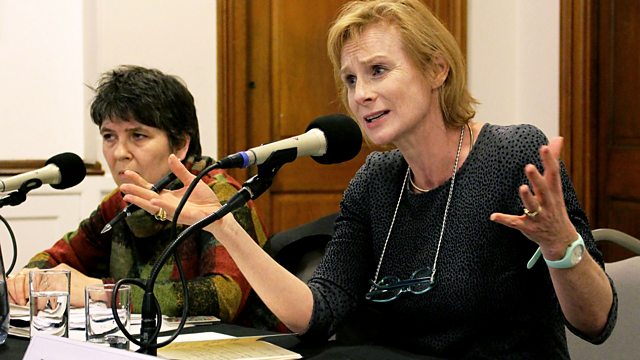 50 Years of the Abortion Act

The Moral Maze returns with a special programme marking 50 years of the Abortion Act, recorded in front of an audience of students at UCL Faculty of Laws. Under the 1967 law, terminations were made legal for the first time in limited circumstances, with the agreement of two doctors. By far the most common reason for abortion (accounting for more than 181,000 of the 185,596 abortions in 2016) has been that continuing the pregnancy would risk injury to the physical or mental health of the pregnant woman, greater than if the pregnancy were terminated (as a point of clarification, the introduction to the programme only states the strictest grounds, which account for a very small number of abortions). Social attitudes have changed and many doctors now support the official line of the British Medical Association which wants abortion to be decriminalised completely. So is it time for abortion to be treated like any other medical procedure that is regulated by the General Medical Council? On the other side of the dispute are those who say the Act has been too liberally interpreted. With nearly 200,000 abortions a year in the UK, they say we effectively have 'abortion on demand' and they want the law to be tightened to protect the rights of 'pre-born children' and their mothers. Whatever the details of time-limits and interpretation of the law, the moral dividing line remains as deeply-etched as it was in 1967: it is between those who think a human life starts at conception and those who don't.

The Moral Maze has teamed up with Dundee University's Centre for Argument Technology. For the first time, researchers will analyse the debate and use the data to create an interactive web page called "Test your argument", hosted by the BBC's experimental site "Taster" and available via the Radio 4 website after the broadcast.

The Morality of Holidays

How The Debate Unfolded

The Story of the Debate

It’s fifty years since an act of parliament changed abortion from being a serious crime into a lawful procedure, albeit under what were intended to be specific, if not strict, legal and medical conditions.

Half a century and nine million abortions on, it is still among the most vexed of moral issues, an argument that can never be resolved as it pits the biological autonomy of the woman against the right to life of the unborn. More, it calls into question what it is to be a person, what constitutes a morally discrete human being.

The central themes don’t change. The emphasis shifts ( you don’t hear much now about women dying from illegal, “back street” abortions which was a key driver of the 1967 legislation). And the context changes – medical advances have brought forward the age at which a foetus might be independently viable, for instance, and being able to tell the sex early in pregnancy raises the controversial issue of abortion as a means of gender selection.

The argument as it turned out could be broken into two interwoven stages…. How the act had turned out, whether there really was now “abortion on demand” and were lines drawn in the morally appropriate places. And then the bedrock argument about whether abortion was right at all.

We had four particularly good witnesses, passionate, committed and well-informed. They were clear, articulate and robust enough to look after themselves in that cockpit of cross-examination that is the Maze’s trademark.

These arguments ebb and flow, but in good programmes there are always key moments; moments when the clash of debate illuminates the issue or exposes a contradiction.

How had the act worked? The anti-abortionists said 200,000 abortions showed  it was too easy, that the conditions in the original act were being ignored, in some cases for convenience, if not fashion.

Professor Wendy Savage, a retired gynaecologist now in her 80s who had done thousands of abortions herself, said that just wasn’t the case in her experience.  And then – one of those flashes of illumination – she talked about one of the conditions in the act - the risk of continuing with the pregnancy should be greater than the risk of the termination.  Those who drafted it, Professor Savage said, had a mistakenly exaggerated view of the dangers of the operation. The fact was that the danger of continuing  with the pregnancy was always greater than that of an abortion, in the early stages at least, which meant, in legal terms, it could always be justified.

On the wider issue there were key moments during the interchange over the nature of the procedure itself. Aisling Hubert, a “Pro-Life” campaigner who had spent £47,000 of her own money trying unsuccessfully  to prosecute two doctors over alleged gender selection terminations, talked powerfully about how that was what motivated her. She reckoned if women knew actually what was involved they would not want to go through with it.

Panellist Tim Stanley, opposed to abortion himself, asked why Professor Savage why many doctors were reluctant to perform the operation after 12 weeks (the legal limit, except in special circumstances, is 24 weeks).

Professor Savage: “Well doctors are not immune from these feelings of squeamishness that other people have, but they probably haven’t spent a lot of time listening to women and they’ve certainly never seen women dying.

Was it not, Tim Stanley asked, because after 12 weeks you have to dismember the foetus to get it out of the womb?

Professor Savage is not one to duck difficult questions: “After 16 weeks you have to dismember it”.

A jolt, but a turning point? Panellist Claire Fox, who believes abortion should be solely the woman’s choice, countered that all operations looked grim. “If you showed me a picture of having my appendix out, I’d probably get sick and never go to the doctors again, or never go in a hospital”. Squeamishness was not the same as morality.

But  Aisling Hubert tartly pointed out that one operation was a life-saving procedure, the other a life-ending one.

I felt the mood in the room had changed: I wonder if it had in our radio audience?

The Moral Maze debate often seems to turn on hard cases and there was a particularly telling interchange between panellist Anne McElvoy and the Catholic writer, and anti-abortion absolutist, Ed Condon. What about, Anne asked, the victims of rape who become pregnant. Would he see that as an exceptional case?

Ed Condon, though appalled at the crime and sympathetic to the victim, did not. “We live in a society that holds as an objective value, human life”, he said.

“We don’t allow the victims of sexual crime to execute they’re attackers. So it seems to me we’re placing a greater value on the human life of the attacker than on the child. And it seems to me that if you’re arguing for abortion, in say cases of rape or incest, you’re basically saying it’s OK to revisit the crimes of the father on the child but not on the father himself.”

Time and again, we returned to the central issue of when a collection of cells becomes a human being with a right to life, at conception, at birth, or the point at which the foetus becomes viable, independent of the mother.

Panellist Giles Fraser, an Anglican priest, and witness Dr Kate Greasely, an academic who has specialised in the abortion question, were in agreement on one thing at least- that it was a gradual process, not a fixed point. He talked in biblical terms about life “quickening”; she saw what she called “personhood” as something that “faded in”.

Giles asked: “Do you think about when personhood happens? How it happens?”

Kate: I think personhood is wrapped up in psychological characteristics, most importantly self-consciousness. I don’t think that something is plausibly a person if it’s not self-conscious. But these properties themselves don’t snap into existence do they? They come about quite gradually. So that’s why I think personhood also comes about gradually. That’s very different from saying “it’s whatever we think it is”. It’s saying no, some things, like day and night, are real things, but there’s no absolute moment when the one turns into another.”

Just a few highlights from a passionate, complex debate.  When I talk about the programme, people tend to ask me “and what conclusion did you reach?”, or “who won?”.  Until now, I’ve always thought that misses the point. The real value is in coming across something that makes you think about a big issue in a different way, about hearing an argument tested to destruction, about being able to weigh up competing points of view.

(Editorial note: The act contained conditions in addition to those stated in the introduction of the programme. By far the most common reason for abortion is that the pregnancy has not exceeded 24 weeks and that continuing would risk injury to the physical or mental health of the pregnant woman, greater than if the pregnancy were terminated).

See all galleries from 50 Years of the Abortion Act (2)