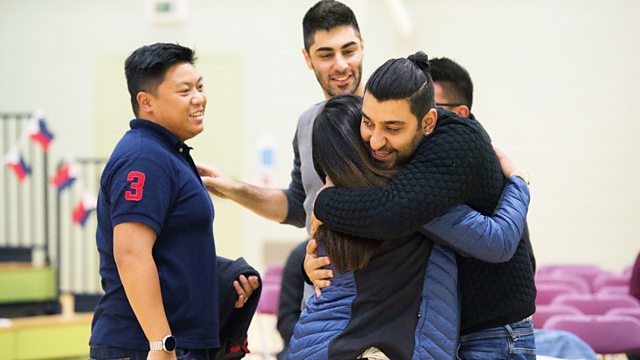 This week Kevin Bocquet talks to students and families who have moved to Preston after Hurricane Irma, the moral debate on guns and "Bring Your Own Religion" pilgrimage.

More than 700 students and families displaced by Hurricane Irma have relocated to Preston to continue their studies at the University of Central Lancashire. Kevin Bocquet looks at how the university providing spiritual and emotional support.

After the mass shooting in Las Vegas, Patrick Carolan, Executive Director of the Franciscan Action Network says "Gun safety is not a political issue. It is a pro-life issue, a moral issue, and an ethical issue. We need to stop just offering prayers and start acting" he debates with Pastor Vance Pitman of Hope Church, Las Vegas.

Alex Strangwayes-Booth has been on a "Bring Your Own Religion" pilgrimage with the British Pilgrimage Trust, reviving the tradition of making journeys on foot to holy
places.

The Scottish Episcopal Church will face sanctions after breaking with Anglican teaching on same-sex marriage. Primus, Bishop Mark Strange talks to William on what this means.

Zoe Clark-Coates has lost five pre-term babies. She tells William why she and her husband, Andy, set up a charity the Mariposa Trust

Melvyn Bragg on why it is a disgrace that society has deemed the Bible too complicated, describing the King James version as one of the greatest pieces of art ever
produced.

The Nobel Peace Prize 2017 has been awarded to International Campaign to Abolish Nuclear Weapons. Russell Whiting from Christian CND talks to us about faith
based promotion of the campaign.