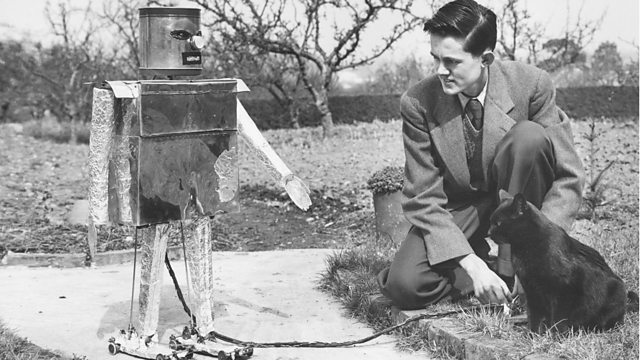 Kenneth Colley and Yolanda Kettle with readings from Descartes to Philip K Dick and music from Haydn and Handel to Ligeti and Reich in an exploration of robots and automata.

Readers Kenneth Colley and Yolanda Kettle. From Descartes' thought experiments on the way clockwork illuminates animal nature, via Hoffmann's humorous but slightly anxious fantasia about the chaos caused when an automaton is introduced into polite society, to modern science fiction's explorations of how humans and robots might ultimately meet in an apocalyptic conflict. With music from Bach, Haydn and Handel, to Ligeti, Stockhausen and Reich, and Aphex Twin.

The Art of Forgetting

Early on in the process of making this programme some people I spoke to expressed scepticism about the idea that there would be enough relevant material in the classical canon to sustain a programme like this about robots. It is true that the word ‘robot’ did not enter the language until the 20th century, in Karel Capek’s play R.U.R (Rossum’s Universal Robots), and I’ve included an excerpt from that work in the programme (although Capek’s robots are not exactly robots as we often think of them, i.e, mechanical men – they’re flesh-and-blood workers engineered just to work). But despite the relatively recent introduction of the word, the concept of a robot is a point of convergence for lots of human preoccupations which are as old as the hills: How will technology change us? What should our relationship with work be like? How should we deal with conflict? Where should we find comfort? What does it mean to be alive? Surely these questions and others like them are dealt with at length in all areas of human culture.

After an electronic rendition of Bach’s modulating canon from the Musical Offering, arranged to play on an endless loop, we hear Robert Pinsky’s imaginative unveiling of the arrival of the robots in his poem ‘The Robots’. After that we have a sequence of words and music exploring pre-industrial Europe’s fascination with the cultural predecessor of the robot, the automaton. From Descartes and Diderot using the example of the automaton as a reference point to debate what sets living things apart from everything else, and what distinguishes rational beings as a subset of living things, we move to Hoffmann’s rather more anxious – and humerous – exploration of the same question. Bird automata feature in several of the readings, so Messiaen’s study of bird song is joined with part of the second movement of Haydn’s 100th Symphony, inspired by clockwork, and music inspired directly by automata from Tchaikovsky and Offenbach. An extract from Handel’s warlike oratorio Judas Maccabaeus acknowledges the (modern) use of robots in warfare, and the last movement of Mozart’s 11th Piano Sonata is a nod to the 18th century hoax The Mechanical Turk – supposedly an automaton capable of playing chess.

The further we move into the 20th century, the more anxious the extracts become, but they also take on a visionary edge. Philip K. Dick’s depiction of the melancholy of a comfort robot is joined by a rendition of Ligeti’s study for piano Vertige, arranged for player piano; an extract from Capek’s RUR, describing the robot for the first time, as a soulless worker, is set off on the one hand by the translucent lightness of Steve Reich’s Music for 18 Musicians, surely a response on some level to the experience of mechanisation, and on the other by the extremely human lament of the Hebrew slaves, from Verdi’s Nabucco.

The idea that robots will ultimately destroy humanity is broached and explored in two extracts from Isaac Asimov, Borges poem about chess, and a reflection on where it all might end from Sara Teasdale (the title of which was borrowed by Ray Bradbury for a short story about a robotised house at the nuclear apocalypse) along with a piece of techno futurism from Aphex Twin, and some more frantic music for player piano, this time a study by Colnon Nancarrow.

We finish where we started, with Bach’s never ending canon.