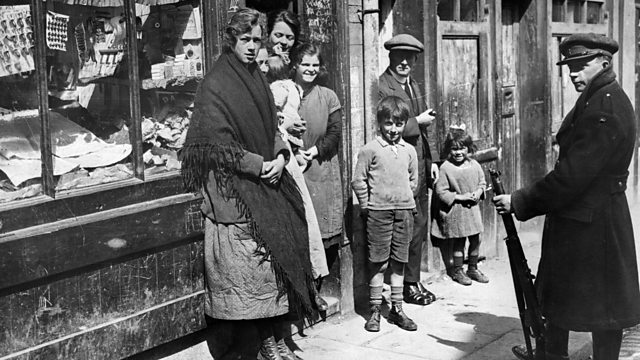 Book of the Week Wounds
Episode 3 of 5

The war comes into the town when the IRA send round an order that District Inspector Tobias O'Sullivan must be killed. This is a death which will haunt Fergal Keane's family.

After nearly three decades reporting conflict from all over the world for the BBC, Fergal Keane goes home to Ireland to tell a story that lies at the root of his fascination with war. It's a family tale about how the ghosts of the past return to shape the present.

Fergal's grandmother, Hanna Purtill, her brother Mick and his friend Con Brosnan, along with many of their neighbours, found themselves caught up in the revolution that followed the 1916 Easter Rising. They took up guns to fight the British Empire and create an independent Ireland.

Many thousands of people took part in the War of Independence and the Civil War that followed. Whatever side they chose, all were changed in some way by the costs of violence. Fergal uses the experiences of his ancestral homeland in north Kerry to examine why people will kill for a cause and how the act of killing reverberates through the generations.

In the third episode, the war comes into the town when the IRA send round an order that District Inspector Tobias O'Sullivan must be killed. Con Brosnan is one of the volunteers who respond to that call. The death of O'Sullivan will haunt Fergal Keane's family through the generations.