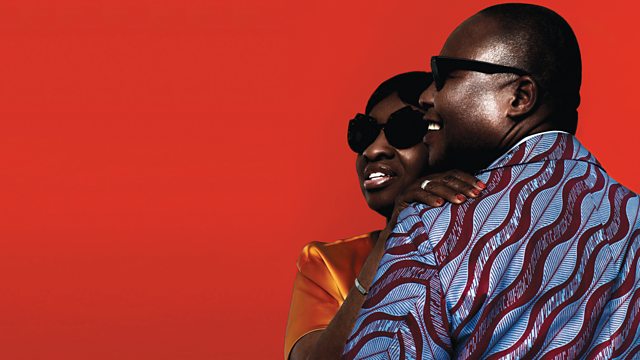 Kathryn Tickell presents a specially recorded session by the Malian duo Amadou and Mariam, performing material from their new album La Confusion. Plus the usual round-up of new releases from across the globe, including an interview with Joe Boyd and Andrea Goertler, co-producers of At Least Wave Your Handkerchief At Me, a new collection of traditional songs from Southern Albania, recorded by the group Saz'iso.

Amadou and Mariam are one of Mali's best known and most celebrated artists. Their career stretches back to the days of the Bamako scene of the 1970s but they have gone onto receive international recognition through a string of awards and high-profile collaborations with the likes of Manu Chao, Damon Albarn, Santigold and David Gilmour, charting a course through traditional Malian music, indie rock and dance.

Saz'iso is the coming together of legendary producer Joe Boyd, (Pink Floyd, Nick Drake), sound engineer Jerry Boys (Buena Vista Social Club), Albanian music experts (and co-producers of the record) Edit Pula and Andrea Goertler, and the virtuosic singers and musicians of the Saz'iso collective, who specialise in the unique iso-polyphonic saze style of Southern Albania.

Why Music? The Key to Memory