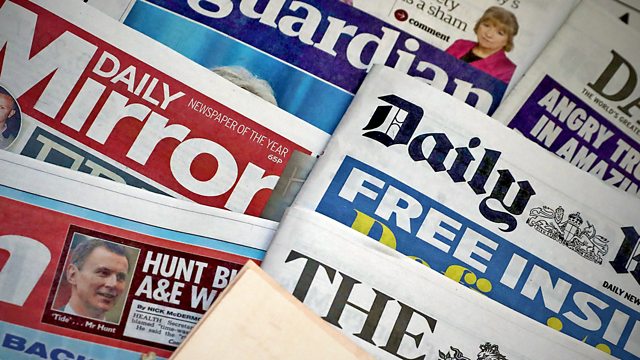 Journalist Hugh Muir examines whether the newspaper industry is losing touch with Britain's increasingly diverse society and if this might be a key reason for its demise.

Does this lack of diversity in newsrooms undermine the quality and accuracy of the news we read?

Hugh began his own career at the Newham Recorder in East London and was one of the very few black, working class journalists on the staff. With a career at newspapers such as The Mail on Sunday, The Evening Standard and The Guardian, he reflects how his background has been both a help and, at times, a hindrance.

We also hear from Miqdaad Versi of the Muslim Council of Britain who has persistently challenged inaccurate and ill-informed reporting about Muslim people in the press. He argues there is too often a lack of basic cultural understanding on the part of journalists, resulting in hostility, mistrust and division.

Eleanor Mills, Editorial Director of the Sunday Times, says that the depth and breadth of reporting is profoundly improved by more diversity in newsrooms and connecting to wider audiences is vital to the commercial survival of newspapers.

Neil Wallis, formerly deputy editor of the Sun and the News of the World, cautions against politically-correct hiring and suggests the lack of diversity may be because few ethnic minority candidates apply for journalism jobs.

Josie Dobrin, co-founder of Creative Access, reveals the obstacles faced by aspiring journalists from minority and working class backgrounds - such as unpaid internships, unfamiliar cultural codes, and a lack of senior role models. Of all the creative industries, she says, the press is one of the slowest when it comes to diversifying the workforce.

Newspaper apprenticeship schemes are now being set up to try and develop a more diverse talent pool. But will these bring change fast enough to save an industry with circulations apparently in terminal decline?